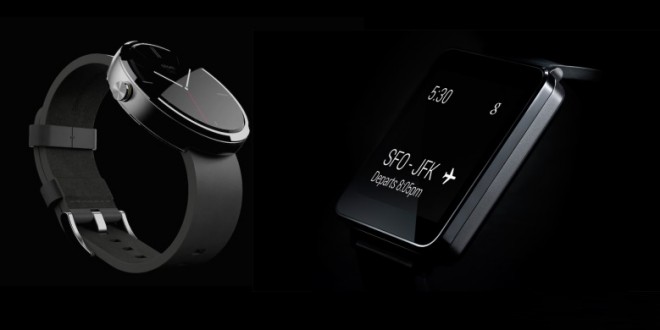 2014 will be the year in which wearables will hit the market hard in terms of support and availability. Android Wear, the new software platform from Google destined for smart watches will be a defining factor in the success of this new market, but which of these watches should we choose? Although the concept isn’t new, with Samsung Galaxy Gear and Pebble already on the market, offerings from Motorola and LG look to be the most attractive right now. We’ve chosen two of the best looking Android Wear smart watches, the Moto 360 and the LG G Watch, and made them face-off in order to decide what should we be wearing around our wrists in the coming months. Keep in mind that we don’t have final hardware specs for these devices just yet, but that won’t be an issue, because we already know about their features. Let’s see how it goes.

The Moto 360 seems to be the poster child of Android Wear. This smart watch was heavily featured in the debut of the new software’s video in Google’s presentation and it looks to have the biggest following online. Design-wise it’s really gorgeous, with a round body and familiar look. Motorola went with a classic watch look for the 360, and named it accordingly. In the front and center there’s rumored to be a beautiful round OLED display, something that you don’t see very often. Motorola has not confirmed the technology it’s using just yet, but everything points to it, in part because of battery concerns. 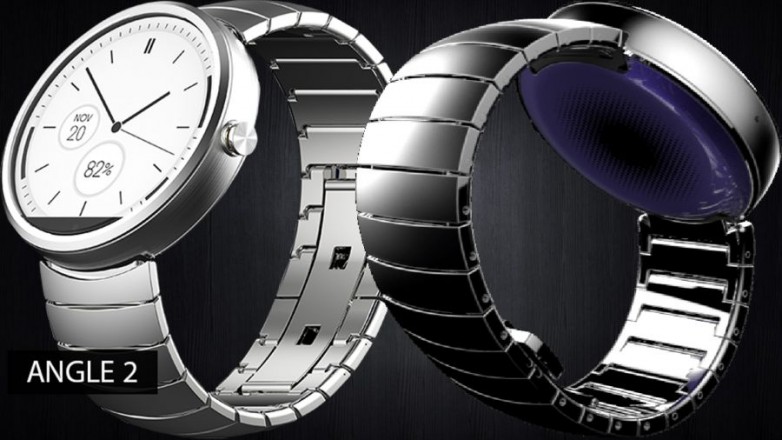 The round design can be another advantage when thinking about orientation. You can wear it on any hand you prefer, and the watch will look just as beautiful and be just as useful. The only button we can see from the photos of the Moto 360 is placed on the side, and it is equally accessible if positioned on the left or the right. Other rumors say that the screen will be protected by sapphire glass, an unsearchable material used to protect expensive watches. If that’s the case, the price of the Moto 360 will rise.

Combine that with the rumors of wireless charging and we could be looking at a device with a price tag of about $299. Motorola already hinted at some “secret” charging technology that will give the Moto 360 longer battery life. Looking at photos of the back of the device, we can clearly see a purple area, which preety much confirms some form of Qi charging. Considering that a wired plug would require an ugly USB port on the side or back, wireless is always a good thing from a design standpoint. Unfortunately there’s no information about water resistance, dust resistance or other features like the Galaxy Gear’s camera. This watch will basically be a window into Google Now, a tether to the Android Phone you wear in your pocket. Maybe that’s the reason nobody talks tech specs just yet, because there won’t be a need for great processing power.

LG has recently released a new video for it’s first Android Wear smart watch, the G Watch. This is also a watch Google promoted in the Android Wear debut video, but has not recieved as much attention as the Motorola device. In all fairness, the G Watch doesn’t look as good as the 360. It’s square shape is reminiscent of Galaxy Gear’s design and  does not impress as much as it’s competition. It is by no means an ugly device, but it’s not as classy as a round-shaped one. We don’t know the type of screen LG will use, but my bet is on OLED yet again. The reason for this is because G Watch will always be on. Its screen does not turn off, and a the black background of the stand-by screen is perfect for saving battery via an OLED screen. 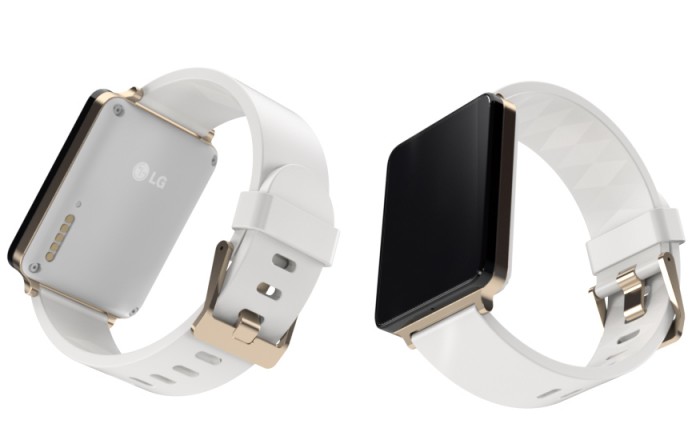 This smart watch will have no physical buttons, so every interaction with it will be via touch input and voice commands. This design also encourages usage on either hand, and the fact that LG used a standard strap means you can change the default one with any other. The G Watch comes in two different colors: Stealth Black and Champagne Gold, so there’s some diversity there, and both of them are neutral and elegant enough to be worn by anyone from teenagers to business people.

On the back we can clearly see some golden contacts, which means that LG did not include wireless charging for it’s first Android Wear smart watch. The device might ship with a cradle of some sort, but fortunately, you won’t have to charge it very often. The company boasts long battery life on a single charge, a thing we will most definitely put to the test once the G Watch hits the market. What’s really interesting about this watch in particular is the fact that it’s weather sealed, meaning water and dust does not harm it. This device does not feature a camera, so we have parity here. The price range is also interesting, LG stating that this will not cost a penny over 180 British Pounds, which translates to about $300.  No other details were disclosed, such as processor, RAM or storage.

Now that we’ve seen what the first Android Wear smart watches can do, it’s time to pick a winner. Even though we don’t have the full picture on any of them, at a glance, the Moto 360 seems to be the winner from our perspective. The reason for this is the fact that the price range is the same, but Motorola has managed to include wireless charging into it’s device. For the same price of the G Watch you will be able to get a better looking watch with similar specs and sapphire glass on top.

We picked our winner, but we’re interested to know what’s your take on this battle between Android Wear smart watches. Let us know in the comments section below.

Old-school gamer with a cheeky tongue that gets me in trouble. When I'm not playing games, I'm writing about them, preferably in the vicinity of a fridge! Oh, and if you're a Justin Bieber fan, I'm afraid we can't be friends!
Previous Dark Souls 2 PC Review
Next GTA 5 already shipped 33 million copies since launch