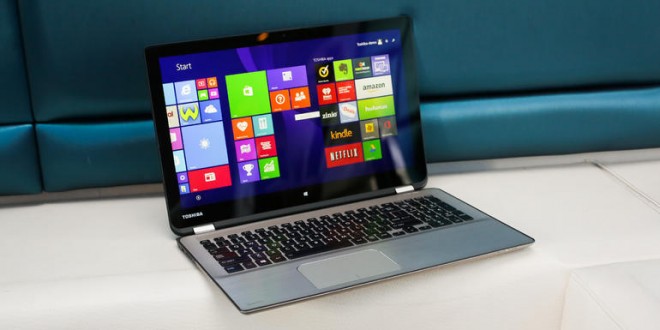 Toshiba has announced today the new laptop, the Satellite Radius, which has as a special feature: a foldable screen that allows users to set it on various laptop models. This is just one of the brand new devices that Toshiba has been proudly announcing. As for the Toshiba Satellite Radius, the laptop features a 4th generation Intel processor and an 8GB of RAM when it is working in the entry level mode. The full HD 15.6 inch screen supports 4K and it is equipped with 1 terabyte of hard drive storage.  The most interesting feature though, is the ability to fold 360 degrees due to the hinge that allows the screen to rotate and to lock into place so whichever position is chosen, the screen will be steady.  So, imagine yourself wanting to keep your laptop upside down and still have the screen towards you, . It is a great ability for those who are active and who need extreme mobility. The laptop will be available in early July for $925 and it is worth every dollar.

The other two laptops that were announced are the Satellite Click 2 and Satellite Click 2 Pro. It seems like Toshiba has been working on some amazing devices that are completely mobile, because these two models also have removable displays that double as tablets. They have the same screen size, 13.3-inch displays, full IPS and run Windows 8.1. The difference between the Satellite Click 2 and Click 2 Pro is that the first model has a lock-in hinge to remove and attach the display tablet and the second model, the Pro one, offers a push-to release. The Satellite Click 2 wears an Intel Pentium processor, quad-core, and 500 GB hard drive and Skull Candy audio experience, with Skull candy’s Crusher headphones.  The device will be available for $586.99. The Pro version of it comes with a classier design represented by a brushed aluminum chassis of 0.78 inches thick. It wears the 4th generation Intel Core processor and it offers a built-in MicroSD slot, Micro HDMI, Micro USB 2.0 ports and Miracast for TV screen sharing.  This model will be available for almost double the Click 2’s price: $1028.

It looks like Toshiba’s developers have been working hard lately, given the fact that they have unveiled three tablets, too, one of them under the Encore brand and the third, under the Excite brand. More details will be coming soon about these devices and their prices, too!

I’m Load The Game’s co-founder and community manager, and whenever I’m not answering questions on social media platforms, I spend my time digging up the latest news and rumors and writing them up. That’s not to say I’m all work and no fun, not at all. If my spare time allows it, I like to engage in some good old fashioned online carnage. If it’s an MMO with swords and lots of PvP, I’m most likely in it. Oh, and if you’re looking to pick a fight in Tekken or Mortal Kombat, I’ll be more than happy to assist! Connect with me by email markjudge (@) loadthegame.com only
@@MarkJudgeLTG
Previous Thermal touch, the AR prototype, will fill up the Google Glass experience!
Next Skype is revealing new translation feature at the Inaugural Code Conference!