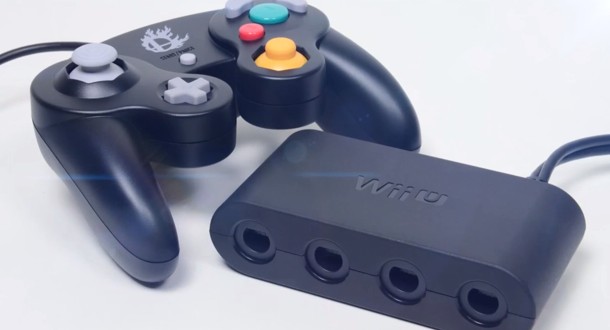 Nintendo announced today a new accessory for the Wii U. The Wii U GameCube Controller Adaptar will allow you to use your old GameCube controllers on the Wii U with full compatibility. A surprising move on Nintendo’s part to offer such compatibility between its two distinct devices considering no other company’s did this before unless we take into account some of the older UBS DualShock controllers that still with the PS4.

Nintendo’s image of the device shows a four-port adapter with a special Smach Bros. inspired controller. The accessory will connect to the console trough two USB ports. No pricing or release date is available for now. Super Smash Bros. is expected for winter 2014 for the Wii U and it will be playable at Best Buy during E3. For the Nintendo 3DS, Super Smash Bros. will arrive this summer.

The controller got revealed together with Nintendo’s Super Smash Bros. Invitational tournament that will be held in June 10th in Los Angeles during E3 at the Nokia Tether. The trailer of the tournament shows the 16 hand-picked challengers and Geoff Keighley as host. Four players will be pitted against each other in five minute matches and the two of the best players will advance to the next round. In the first, second and third round players will be permitted to use items. In the grand finals items will be disabled. Player will choose only from stock characters: Bowser, Donkey Kong, Fox McCloud, Greninja, Kirby, Link, Little Mac, Mario, Marth, Mega Man, Pit, Rosalina and Luma, Villager, Samus, Pikmin and Olimar, Sonic, Wii Fit Trainer, Zelda and Zero Suit Samus.

Tech enthusiast and RPG gamer, I've been surrounded by technology and PC hardware my entire life. I'm fascinated by anything mobile, and when I'm not tinkering with some newly released gadget, I love to immerse myself in the epic tales of Role Playing Games.
Previous ShareFile for iPhone is now available on the app store
Next The Amazon vs Hachette Book Group dispute is still ongoing