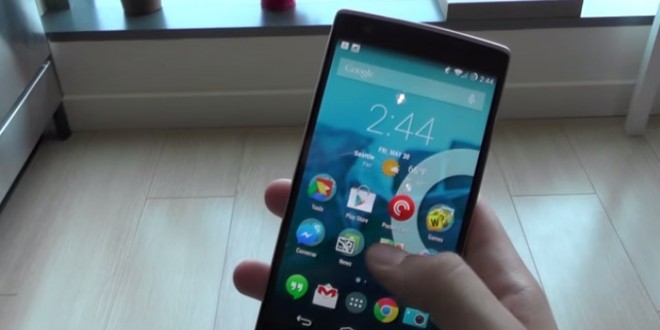 OnePlus One hands on review

OnePlus One Review – Cheap, but any good?

The best way to describe the OnePlus One’s design is simple, if a bit generic. But it’s really not about the external casing, which is basically a slab of glass surrounded by a single piece of plastic. It’s about the leading hardware that you are getting for the surprising $299 price. This includes a 1080p, 5.5 inch display, stereo speakers on the bottom and internal specs like 3 GB of RAM and a Snapdragon 801 processor, as well as a 13 MP camera.

All those great specs translate intro an awesome user experience as well. The OnePlus One performs on par with 2014’s flagship phones in terms of app performance and multitasking. You never got the feeling that the internals are getting pushed over the limit, even when you are doing more intensive tasks. Part of that performance bump is also due to tweeks in the Cyanogen Mod, which the OnePlus One comes with out of the box.

On the design side, don’t be put off by the fact that this is an Asian phone. It’s miles above the build quality of other wide-spread phones, such as the Samsung Galaxy Note 3. It is a lit rough around the edges, and it is indeed built into a plastic casing, but other than that, you won’t find too much flaws in the One’s design. The display isn’t overshadowed by too much side plastic, the phone feels solid and well built, it can take a beating (although we don’t recommend bashing it with a sledgehammer), and is fairly unique in its own way. It definitely stands out from the crowd, and that’s in a good way.

CN11s offers different ways to customize your device, including a brand new theme engine, that lets you pick and choose different parts of themes, as well as allowing you to tweak several different options to change the look and feel of the launcher. This is all done even without rooting the device, but of course if your are interested in that kind of thing, it can be done quickly and easily with a command line. The most interesting part in having Cyanogen Mod loaded on the device from the start is that you don’t need to root the OnePlus One. It offers a lot of customization that are normally only available to people rooting their devices.

Other parts the interface aside, Cyanogen Mod has made big changes with the camera in the latest build of CM. The simple interface lets you switch between shooting modes and live filters with a swipe across the viewfinder. The main issue with the camera comes from not knowing when the use Auto or HDR, as Auto will often let in too much light trying to brighten up the picture (which leaves the pictures cool and unnatural looking), while HDR goes overboard in the other direction, bringing in to much colors and over-processing a bit. Night shots are pretty much hit and miss, as the camera doesn’t have optical image stabilization and can’t clear up blurry pictures. At least there is slow shutter speed and night modes to help clear that up somewhat. On the video front we are looking at 4k video as well as 60 and 120 FPS slow motion video, but that is limited to 720p only.

I am generally impressed with the quality of the camera overall, and it’s important to know that aside from the exclusion of the optical image stabilization, most of these issues can be fixed with software updates, provided CM wants to put in the time to make those changes.

So is the OnePlus One the phone for you? Well, if you are on the budget, the $299 starting price is going to be pretty hard to resist, and considering that your are getting 2014 level specs, you’re going to appreciate the performance that you get from Cyanogen Mod paired with hardware that can normally found in smartphones costing twice as much. It’s sometimes difficult to hold and handle the OnePlus One due to its size, but if you have larger hands, this shouldn’t be a real issue.

Unfortunately, the OnePlus One’s main disadvantage is that it’s extremely hard to come by. As it stands right now, the phone is only obtainable directly from the manufacturer, and you can only buy it if either the company sends you an invitation, or you get one from a friend that already bought the phone. This situation is likely to change in the future (at the moment, it’s safe to assume OnePlus can’t really cope with the huge demand for the One), but for now, getting one is hard. Other negative aspects would be the lack of microSD support, or the fact that the battery is non-removable, despite the back cover of the One coming off.

Overall, we warmly recommend the OnePlus One to anyone shopping on a budget. It’s definitely the best bang for the buck you can ask for, and no phone offers this kind of high-end hardware for such a modest price. For those of you looking for the best of the best, the OnePlus One could disappoint in some regards, but overall, it’s a phone that can compete with well established flagship phones that cost twice as much. It’s a bargain, and one you shouldn’t pass up on, should you have the chance to buy it!

I’m Load The Game’s co-founder and community manager, and whenever I’m not answering questions on social media platforms, I spend my time digging up the latest news and rumors and writing them up. That’s not to say I’m all work and no fun, not at all. If my spare time allows it, I like to engage in some good old fashioned online carnage. If it’s an MMO with swords and lots of PvP, I’m most likely in it. Oh, and if you’re looking to pick a fight in Tekken or Mortal Kombat, I’ll be more than happy to assist! Connect with me by email markjudge (@) loadthegame.com only
@@MarkJudgeLTG
Previous Xbox One vs PS4: Sony is still in the lead
Next Samsung Galaxy S5 sales drop for Q3