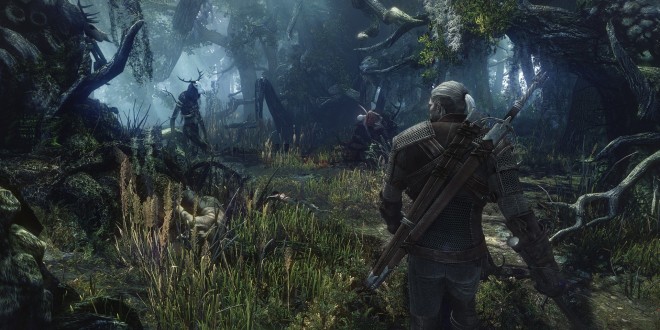 CD Projek Red presented a new Xbox One gameplay footage of The Witcher 3: Wild Hunt on the E3 2014 press conference. The video shows an agile Geralt performing new action types like jumping and vaulting. These types of movement were not present in the previous installments of the game, but work well with the new game, allowing Geralt to pursue its prey, a wild griffin. We can also take a glimpse at the great, open world of the game. Geralt’s witcher sense no longer has it’s black and white filter but it’s function is unchanged as it allows him to track the griffin trough the wast No Man’s Land. The Witcher uses a small crossbow in it’s hunt, to make the griffin bleed in order to track it. Even from this small in-game footage we can see that the open-world of the Witcher 3: Wild Hunt is massive and the graphics are stunning.

The Witcher encounters a group of deserters along the way, so we can also observe some of the combat mechanics and magics. Geralt’s fighting stile is as agile as ever, and also uses it’s witcher magics in to take down hes enemies. A gory finishing move is icing on the cake, as we see a deserter cut in half with one great power attack.

The new gameplay footage shows a bit of the new inventory system, as well as some of the potion crafting system. The cinematics of the game look very polished as well. Quests in The Witcher 3: Wild Hunt can intersect, so you might go out and finish more quest at a time and then return to the city for your well deserved rewards.

Tech enthusiast and RPG gamer, I've been surrounded by technology and PC hardware my entire life. I'm fascinated by anything mobile, and when I'm not tinkering with some newly released gadget, I love to immerse myself in the epic tales of Role Playing Games.
Previous E3 2014: Halo 5 Guardians Beta Revealed, game launching in 2015
Next E3 2014: The Division gameplay demo revealed