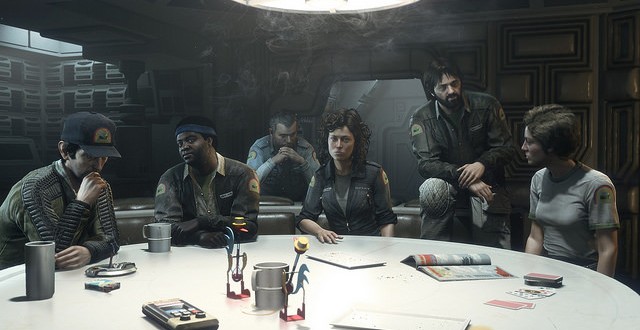 Creative Assembly revealed the pre-order bonus content for Alien Isolation and it looks like it will be a very special one. Pre-ordering the game’s Nostromo Edition will grant you access to the Crew Expandable DLC, which includes two missions voiced by none other than the original Alien movie cast. This includes Sigourney Weaver as Ellen Ripley, Tom Skerritt as Dallas, Veronic Cartwright as Lambert, Harry Dean Stanton as Brett, and Yaphet Kotto as Parker. In order to relive some iconic moments from the classic 1979 cult film through the Nostromo Edition all you have to do is pre-order Alien Isolation.

While everyone who pre-orders gains access to the first Crew Expandable mission, the second one – Last Survivor – will only be available via certain retailers, which have not been announced yet. Last Survivor has you playing as Ellen Ripley herself as she races to reach the Narcissus shuttle before the Nostromo self-destructs. The first mission lets you play as Ripley as well, but also offers the possibility of choosing between some of the other characters. In this mission your goal is to pursue the alien and force it into the Nostromo’s airlock. Creative Assembly included some variety with this one as you will start with different resources depending on the character you choose to play as.

Alien Isolation’s director Alistair Hope revealed for IGN that the Crew Expandable pre-order bonus missions were devised as “What if” scenarios. “There’s no point in us trying to match beat-for-beat what occurs in the film,” Hope said. “The film is much better at doing that than a game. We came with the approach these guys had a plan to try and take on the alien, to flush it out of an airlock. What else could have happened? What if we could get the original cast back together? What if we could put them back on the Nostromo to face the creature? It just started from there.”

The missions don’t mark a departure from Alien Isolation’s formula and will feature the same dynamic and heart pounding action you will find throughout the main game. There will be no scripted events whatsoever, which only adds to the tension. A Nostromo reunion was something that many Alien fans were hoping to see so we’re more than happy that Creative Assembly managed to pull it off. Alien Isolation will be released on October 7th for Xbox 360, Xbox One, PS3, PS4, and the PC.

I’m Load The Game’s co-founder and community manager, and whenever I’m not answering questions on social media platforms, I spend my time digging up the latest news and rumors and writing them up. That’s not to say I’m all work and no fun, not at all. If my spare time allows it, I like to engage in some good old fashioned online carnage. If it’s an MMO with swords and lots of PvP, I’m most likely in it. Oh, and if you’re looking to pick a fight in Tekken or Mortal Kombat, I’ll be more than happy to assist! Connect with me by email markjudge (@) loadthegame.com only
@@MarkJudgeLTG
Previous Epic Games’ Fortnite might make it to PS4 and Xbox One
Next Lords of the Fallen lands October 31st on PS4, Xbox One and PC