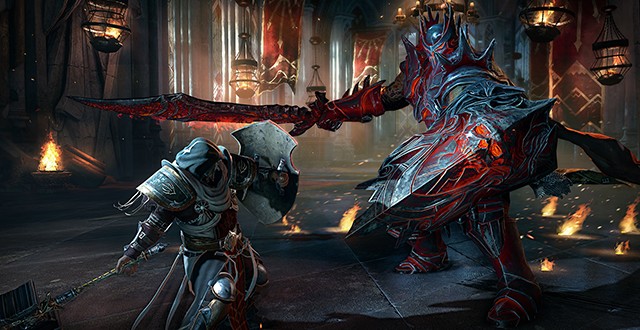 Lords of the Fallen lands October 31st on PS4, Xbox One and PC

Lords of the Fallen, an upcoming Action RPG co-developed by CI Games and Deck13 Interactive will be arriving on October 31st, distributor Square Enix announced today. Lords of the Fallen is more commonly known as the European version of Dark Souls as there are plenty of similarities between the two. However, the upcoming title seems to have more of an emphasis on the plot, which is not surprising considering that quite an original story was written for this new IP. Take a look below and see what I mean.

“In an unforgiving world where no sin is ever forgotten, Harkyn, a convicted criminal, is given a chance for redemption. Just when rulers of the world get close to finding a way to banish all evil from humans, an army of the long-ago defeated god attacks the human realm. Released from prison, Harkyn and his mentor, Kaslo, set out on a mission to stop the war.In his journey, Harkyn will forge strong alliances and face even stronger enemies. He will learn the true power of the Rhogar Lords – commanders of god’s army. He will even bring the battle to the Rhogar, travelling to the heart of the demonic dimension.Will the god manage to enslave humans again? Is mankind really able to banish evil? Will Harkyn’s sins ever be forgiven?”

The devs bragged quite a bit about the story and we definitely can’t blame them, it does sound pretty cool if you ask me. There are three classes to choose from in Lords of the Fallen: Warrior, Rouge, and Cleric. While there’s not a whole lot of variety here, you do have the freedom of mixing these classes for skills and gear. Fortunately there is plenty of both, and on top of that the game also features an awesome combat system. At first glance the combat is very reminiscent of Dark Souls, except that here each class has special moves that can be used any time you have sufficient action points. The two games are very alike as we mentioned, but Lords of the Fallen definitely brings some new stuff to the table so it’s unlikely that it will feel like just another clone.

Lords of the Fallen will be arriving on October 31st for PS4, Xbox One, and the PC. The devs stated earlier this year that they are trying to have the game running in 1080p on all platforms, but it’s “slightly tougher” on the Xbox One.

I’m Load The Game’s co-founder and community manager, and whenever I’m not answering questions on social media platforms, I spend my time digging up the latest news and rumors and writing them up. That’s not to say I’m all work and no fun, not at all. If my spare time allows it, I like to engage in some good old fashioned online carnage. If it’s an MMO with swords and lots of PvP, I’m most likely in it. Oh, and if you’re looking to pick a fight in Tekken or Mortal Kombat, I’ll be more than happy to assist! Connect with me by email markjudge (@) loadthegame.com only
@@MarkJudgeLTG
Previous Alien Isolation DLC voiced by the original Alien cast
Next Blizzard reveals top 10 Arcade games for Starcraft 2’s Rock the Cabinet