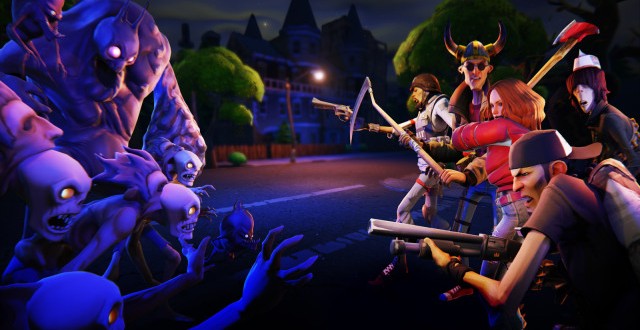 Epic Games’ Fortnite might make it to PS4 and Xbox One

Fortnite, Epic Games’ upcoming action/building title was initially scheduled for a PC only release, but a recent interview reveals that the game might also make it to the PS4 and Xbox One at some point. Eurogamer caught up with lead designer Darren Saag and asked him whether or not we’ll end up seeing next-gen versions of the title. While he didn’t actually confirm it, he did state that Sony and Microsoft’s consoles are now more suitable for a free-to-play game. The PC platform seemed like a natural fit when development began, but now the PS4 and Xbox One also look like they could support a title such as Fortnite.

“It was still a little unsure about where the next generation of consoles were going to land with iterative and free-to-play games,” Saag said. “PC just allowed us to push patches and push updates quicker and do heavy iteration. At the time we were conceiving of the project, that was why. Things have changed from the console space and have adapted to the new market, which is cool. So because of those adaptations the future for where Fortnite ends up is not set in stone. I think there’s lots of possibilities about how you can interact with Fortnite on different platforms.”

Saag also revealed that Fortnite is one of the most important projects currently going on at Epic Games. The studio also has a new Unreal Tournament title in the works, but that’s still early in development. Fortnite on the other hand is scheduled to come out sometime this year so it’s no surprise that Epic are pouring a lot of their resources to get it done on time. Saag said the team working on Fortnite numbers around 90 people while the company at large has beyond several hundred, but couldn’t give the exact numbers.

“We are currently the biggest team in the organisation,” Saag said. “Fortnite has actually been the company’s primary focus for quite a while. We do have the lion’s share of the development teams. We’re working with EGP (Epic Games Poland), we have engineers in Epic Seattle, and obviously we’ve got tons of guys here at HQ, so we’re definitely the biggest project that Epic is currently on. But as we’re a living project, the studio’s going to have to force-trade guys over time.”

Fortnite is scheduled to be released later this year for PC and hopefully for PS4 and Xbox One as well at some point.

I’m Load The Game’s co-founder and community manager, and whenever I’m not answering questions on social media platforms, I spend my time digging up the latest news and rumors and writing them up. That’s not to say I’m all work and no fun, not at all. If my spare time allows it, I like to engage in some good old fashioned online carnage. If it’s an MMO with swords and lots of PvP, I’m most likely in it. Oh, and if you’re looking to pick a fight in Tekken or Mortal Kombat, I’ll be more than happy to assist! Connect with me by email markjudge (@) loadthegame.com only
@@MarkJudgeLTG
Previous The iPhone 6 will feature a sapphire crystal display
Next Alien Isolation DLC voiced by the original Alien cast