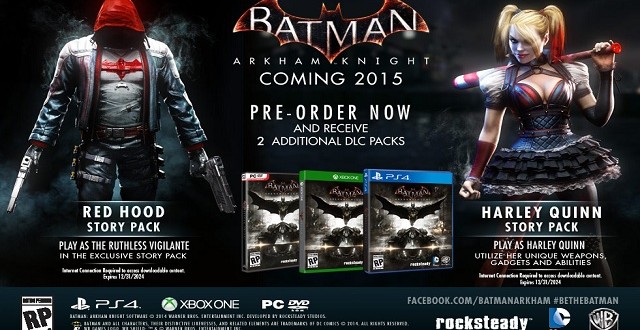 Batman Arkham Knight gets even more DLC in the form of the Red Hood story pack. This latest batch of downloadable content will allow you to play as the ruthless vigilante and terrorize Gotham City. Last month Rocksteady announced a similar addon that gives you the opportunity of playing as the infamous Harley Quinn on four exclusive challenge maps. We all love Batman but playing as the villain seems a lot more fun sometimes so these DLCs are definitely welcomed. Even better, you don’t even have to pay a cent for them if you happen to pre-order Batman Arkham Knight from GameStop as they’re included as a bonus. The retailer also throws in a exclusive poster to celebrate the 75th anniversary of the Caped Crusader.

As for the Red Hood, he is perhaps not as well known as some of the other iconic villains given that he was not featured in any of the movies. However, he does appear multiple times throughout the comic books and plays an important role in the Batman universe. The Red Hood is merely an alias which was used by several antagonists over the years. His first appearance dates back to 1951 when the criminal mastermind wore a red helmet rather than a hood. During an encounter with Batman and Robin the villain was forced to dive into a basin filled with chemicals in order to escape. This crazy move did save him, but the Red Hood was left permanently disfigured while his hair turned green, his skin white, and his lips red.

If this description sounds familiar that’s because the Red Hood later became none other that The Joker. Since then, several other characters assumed the alias so we’re not really sure about his real identity in Batman Arkham Knight. But this is a story focused DLC after all so we’re likely to find out at least some of the details. The appearance of the Red Hood suggests that maybe we’re going to see The Joker again after all even he presumably died in Batman Arkham City. On the other hand, some say that everyone’s favorite villain will return as the titular Arkham Knight, a character that has remained shrouded in mystery until now.

In any case, Batman will definitely have a tough time dealing with the ever increasing number of bad guys in the upcoming game. On the other hand, he is the Batman after all so maybe we should’t be too worried. Batman Arkham Knight will be released next year for PC, PS4, and the Xbox One.

I’m Load The Game’s co-founder and community manager, and whenever I’m not answering questions on social media platforms, I spend my time digging up the latest news and rumors and writing them up. That’s not to say I’m all work and no fun, not at all. If my spare time allows it, I like to engage in some good old fashioned online carnage. If it’s an MMO with swords and lots of PvP, I’m most likely in it. Oh, and if you’re looking to pick a fight in Tekken or Mortal Kombat, I’ll be more than happy to assist! Connect with me by email markjudge (@) loadthegame.com only
@@MarkJudgeLTG
Previous Star Wars Battlefront and Star Wars Episode 7 will be released around the same time
Next Monthly Xbox One updates will continue at least until October