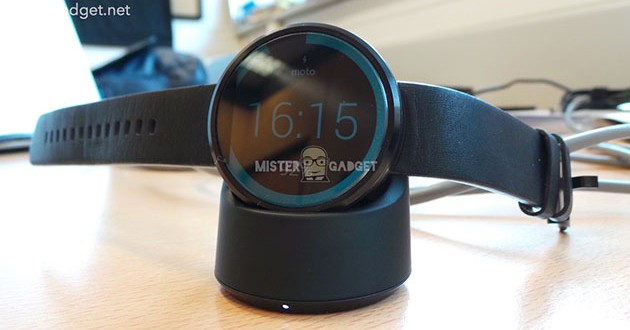 It’s been awhile since we’ve heard anything solid about the posterchild of wrist-based wearable devices, the Moto 360. Motorola’s highly anticipated smartwatch definitely seems to be a step ahead of the competition in more than one regard. We’ve known for awhile that the Moto 360 will come with wireless charging and will sport a more than acceptable battery life, but new leaked information and pictures definitely shed some light on the issue. MisterGadget recently revealed some new images with the Moto 360’s charger, and both the smartwatch and its charger definitely look stylish.

The charger/holder has more than one purpose it seems. For one, it obviously charges the Moto 360, but it also acts as a stand, making it extremely useful for those moments when you’re watch is sitting idly somewhere instead of being on your wrist. Hence, the charger seems extremely practical for night-time charging, providing you with a replacement for your current night-clock or alarm clock. It seems that the Moto 360 is extremely easy to mount into the charger or pick up from it, so whenever you’ll need a battery refill, the process will be fast and comfortable. Speaking about refills, it seems that the Moto 360 won’t need to be charged too often. Motorola boasts a two and a half day battery life, which is about twice as much as current smartwatches such as the Samsung Gear Live. 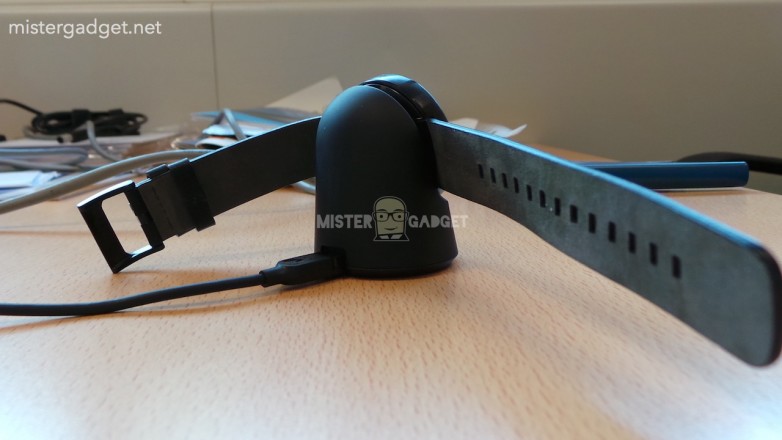 In addition, the Moto 360 is IP67 certified, which means it’s water, dust and shock resistant, at least to an extent. It’s safe to assume rain won’t be a problem, and dropping the watch every now and then shouldn’t leave a significant mark. As you’d expect from a smartwatch, the 360 will also sport a heartbeat sensor, so all your fitness and health needs are being taken care of. Motorola will be launching the Moto 360 alongside its highly anticipated flagship, the Moto X+1, which is expected to land early in September. The watch will be purchasable individually too, but pricing and availability haven’t been disclosed so far.

Old-school gamer with a cheeky tongue that gets me in trouble. When I'm not playing games, I'm writing about them, preferably in the vicinity of a fridge! Oh, and if you're a Justin Bieber fan, I'm afraid we can't be friends!
Previous Naughty Dog’s release of new DLC for The Last of Us made a lot of people angry
Next Sunset Overdrive’s Xbox One exclusivity explained by Insomniac Games