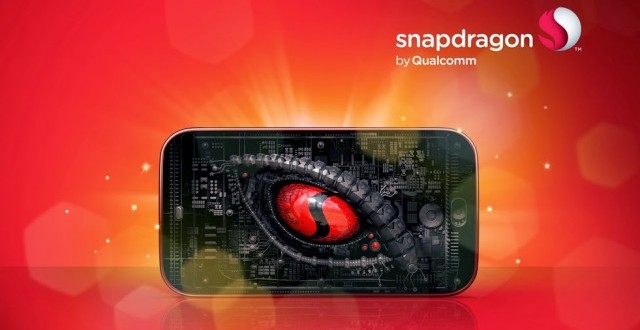 AnTuTu is not only an excellent benchmark database, but also a great place to find out what the manufacturers have been up to lately. A couple of days ago we learned that the Motorola Nexus 6 (also known as Google Shamu) will run on the Android L operating system. Now AnTuTu reveals that Qualcomm is testing its 64-bit Snapdragon 810 chipset, which was announced back in April. The chip was placed in a prototype device equipped with 4GB of RAM and a 6.2-inch display running at 1600 x 2560 pixel resolution. The benchmark database reveals that the Qualcomm Snapdragon 810 can run at frequencies of 200.00 MHz – 940.00 MHz.

Qualcomm’s next-generation processor features four ARM Cortex A57 cores and four A53 cores with 64-bit support. Compared to the Snapdragon 805, the octa-core Qualcomm Snapdragon 810 is said to offer a 25%-55% increase in performance while at the same time being about 20% more power efficient. Its GPU also tells a similar story as the Andreno 430 is able to run faster by about 30% compared to the Adreno 420. However, we need to keep in mind that although this is how Qualcomm advertises the chipset, it’s hard to say how much of this is true until a device equipped with it emerges. Until then, you can check out the Snapdragon 810’s full list of specs below.

A while ago there were rumors saying that Motorola’s Nexus 6 might come equipped with the Snapdragon 810, but now the AnTuTu benchmark database only says Snapdragon 805. The Samsung Galaxy S6 could be a better contender, but information is very scarce regarding the device so who knows? 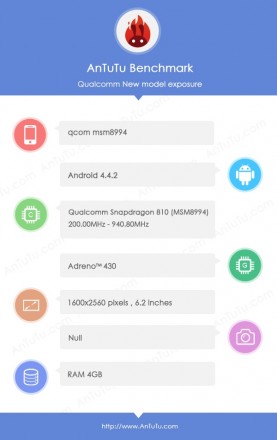 I’m Load The Game’s co-founder and community manager, and whenever I’m not answering questions on social media platforms, I spend my time digging up the latest news and rumors and writing them up. That’s not to say I’m all work and no fun, not at all. If my spare time allows it, I like to engage in some good old fashioned online carnage. If it’s an MMO with swords and lots of PvP, I’m most likely in it. Oh, and if you’re looking to pick a fight in Tekken or Mortal Kombat, I’ll be more than happy to assist! Connect with me by email markjudge (@) loadthegame.com only
@@MarkJudgeLTG
Previous HTC One M8 Phunk limited edition released
Next Robin Williams will appear in World of Warcraft as an NPC