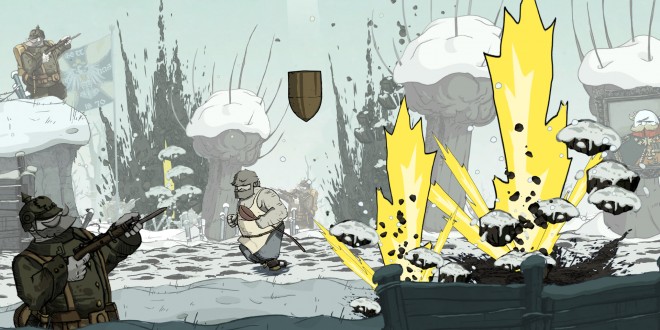 Ubisoft has just announced that its puzzle-adventure title set during World War I – Valiant Hearts: The Great War – is now available for purchasing on the App Store. Because the game is split into four chapters, the first one will set you back £2.99, while the other three chapters are available as separate downloads, each for £2.49. Alternatively, you can buy said three episodes for £5.99.

The mobile version currently available on the iPad, iPhone, and iPod Touch introduces new and intuitive controls, specifically optimized to provide gamers a smooth gameplay experience. The puzzle-based gameplay offers “completely rethought” touch controls, and an “immersive way” for players to interact with history. Just like its consoles and PC brethren, the mobile version also gives its users access to World War I’s detailed historical content, in addition to allowing them to share said information on social media channels – like Facebook, for example.

“Valiant Hearts: The Great War is the story of crossed destinies and a broken love in a world torn apart,” reads to official press-release. “It gives players the chance to live a touching yet comical adventure which focuses on the journey of four people as they brave the battles and difficulties of the Great War following their faithful canine companion. All of the main characters are inextricably drawn together, and friendship, love, sacrifice and tragedy befall each as they help each other to retain their humanity against the horrors of war.”

Valiant Hearts: The Great War was designed over at Ubisoft Montpellier, which is the same studio that brought to life critically-acclaimed titles such as Beyond Good & Evil, Rayman Origins, and Rayman Legends. Just like in the previous two Rayman games, the developer has utilized the UbiArt Framework to easily and efficiently animate Valiant Hearts’ comic-book style, thus crating the game’s stunning scenes, like the dark trenches, green forests, or snowy fields. In addition to the above platforms, Valiant Hearts: The Great War is also available on the PlayStation 4, Xbox One, PlayStation 3, Xbox 360, and PC.

I’m Load The Game’s co-founder and community manager, and whenever I’m not answering questions on social media platforms, I spend my time digging up the latest news and rumors and writing them up. That’s not to say I’m all work and no fun, not at all. If my spare time allows it, I like to engage in some good old fashioned online carnage. If it’s an MMO with swords and lots of PvP, I’m most likely in it. Oh, and if you’re looking to pick a fight in Tekken or Mortal Kombat, I’ll be more than happy to assist! Connect with me by email markjudge (@) loadthegame.com only
@@MarkJudgeLTG
Previous Galaxy Note 4 vs. OnePlus One – which is worth waiting for?
Next Ubisoft will never “drop the ball” on Assassin’s Creed’s quality