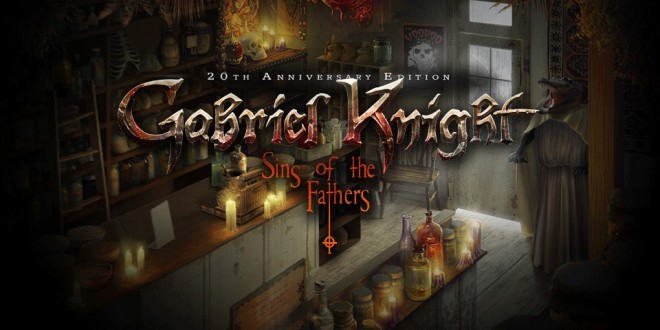 Gabriel Knight: 20 Years Anniversary will be released in October

Gabriel Knight: Sins of The Fathers gets a 20th Anniversary Edition, which will be released on October 15 for PC and MAC. The game is now available for pre-order. If you hurry up, you might even catch Phoenix Online Studios’ limited special offer. Those who pre-order the game get 15% off (pay $17 instead of $19.99) and the soundtrack for free. The developer didn’t specify how long this offer lasts, so if you want the game, now is the time to act.

The game is actually the 1993 murder mystery remastered. The story is kept, but the graphics are updated to high definition and several new features such as puzzles and scenes are added. According to Phoenix, Gabriel Knight Anniversary Edition re-imagines the original for a new generation of fans. Players will take the role of struggling author Gabriel Knight, who investigates a series of ritual killings in New Orleans.

Along with the game, players will receive special extras and bonus edition content, including concept art, behind the scenes and exclusive interviews. Prior to the game’s release, Phoenix Online Studios will start a “10 Days of Gabriel Knight” campaign on October 6, counting down the days until the game comes out. During these days, the developer will release things like screenshots, cutscenes, music from the game and a Gabriel Knight short story.

The “Gabriel Knight” story is written by Jane Jensen. According to Phoenix, as players advance into the game, they will get closer to discover the secrets of Gabriel’s family history. The remastered soundtrack, that is being offered by Phoenix along with the game is composed by Robert Holmes. Though the intellectual property belongs to the now revived Sierra and therefore to Activision, Gabriel Knight: Sins of the Fathers 20 Years Anniversary Edition will be published by Jensen’s company, Pinkerton Road.

I'm a journalism graduate and an occasional gamer. As a kid I used to own a NES clone called "Terminator 2", which was hugely popular in my country. I like old school games and adventure games but I occasionaly play RPG's and Shooters as well, though I wouldn't call myself an expert at these kinds of games. When I'm not writing or playing games I prefer reading detective or fantasy novels.
Previous Nexus 9 from HTC might sport Tegra K1
Next Call of Duty has become “expected”, says Doom designer