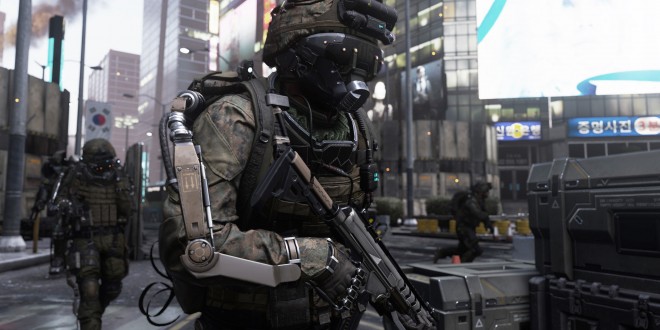 Ever since the original game, Activision had released a new entry in the Call of Duty franchise every last year. Each iteration would bring something new to the proverbial table, but most – if not all – fans or otherwise have always been thinking that said changes are not really big-enough to warrant a new purchase. Just like every year, this year’s Call of Duty – entitled Advanced Warfare – promises to make a dramatic step forward for to the series, this time by introducing super-ability exosuits like jumping really high, cloaking, and more. But is that enough? “No”, says Doom designer John Romero in a recent interview with Edge. Romero says he perfectly understands how Call of Duty is a chart-topper every year, but claims that the core design hasn’t changed much, comparing it with other sports games like Madden.

“Call of Duty is enough of a deathmatch game to keep people coming back to it year after year, but the design isn’t breaking people’s brains,” says Romero. “It’s expected, in the same way Madden is. You see it, you know what it is, and you know the next iteration is going to be like the previous one but in a different location, maybe a different time period. It’ll have guns and a lot of the same features.” Funnily enough, Mark Rubin – producer at Infinity Ward (one of Call of Duty’s developers) – said last year that the franchise can’t change much, because it’s something like a traditional sport – “If soccer/football were all the sudden to switch from ‘OK you can’t use your feet, you have to use your hands’ Who’d watch that really?”

Furthermore, Romero states that successful games don’t need big-time publishers like Activision, but active communities of dedicated gamers – “There’s no Call of Duty-Con, but there is a MineCon, a QuakeCon, and a BlizzCon. If a game makes a bunch of money really quickly, that’s a testament to the marketing power of the company and not really the quality of the game.”

I’m Load The Game’s co-founder and community manager, and whenever I’m not answering questions on social media platforms, I spend my time digging up the latest news and rumors and writing them up. That’s not to say I’m all work and no fun, not at all. If my spare time allows it, I like to engage in some good old fashioned online carnage. If it’s an MMO with swords and lots of PvP, I’m most likely in it. Oh, and if you’re looking to pick a fight in Tekken or Mortal Kombat, I’ll be more than happy to assist! Connect with me by email markjudge (@) loadthegame.com only
@@MarkJudgeLTG
Previous Gabriel Knight: 20 Years Anniversary will be released in October
Next Driveclub’s Season Pass and DLC schedule revealed