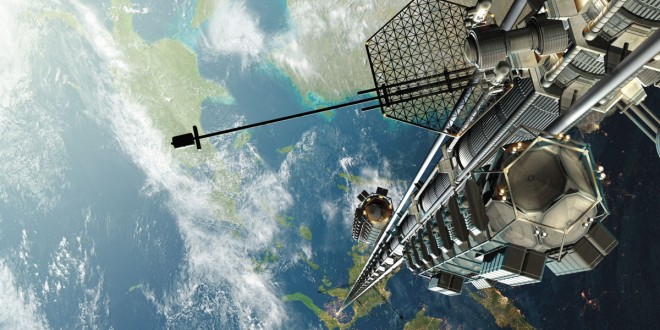 Space elevator to launch in 2050

A Japanese construction company called Obayashi is planning to build a space elevator that would be finished by the time our clocks hit 2050. Space travel is not a new concept, naturally, but an easy and cheap way to travel back and forth for tourism purposes has not yet been developed. If one wants to go to outer space just to see the sights, one still can’t, unless one has a ton of cash at hand. That’s because fuel and equipment are still scarce and very expensive.

Obayashi wants to bypass those enormous costs by creating its very own space elevator. The company says that it will be able to build a fully functioning elevator by 2050 that will reach 96 thousand kilometers in height. The main idea behind the space elevator is to transport people and cargo at lower costs than current technology can transport, since rocket fuel is one of the most expensive materials on the planet. In Obayashi’s vision, the space elevator will consist of robotic cars powered by magnetic linear motors capable of carrying tens of people and tons of cargo.

According to Obayashi, you will ride the space elevator for seven days in order to reach outer space. That will surely be a pretty cramped vacation to take. Nonetheless, the trip ends in outer space, so there’s nothing more exotic than that. Obayashi not only plans to build the space elevator, but it also wants to build a space station built specifically for the space elevator. Nowadays, you still can’t find the technology needed to build a space elevator that won’t crumble in the environment outer space and will also be able to transport huge loads on long distances. Nonetheless, Obayashi believes that carbon nanotechnology will be one of the main developments to further the project and turn it into reality.

If the space elevator becomes reality in the following decades, it will revolutionize space travel and tourism at the same time, potentially transforming global economy. If the technology is fully developed, we can use it to store nuclear waste in outer space, and collect huge amounts of cheap solar power at the same time. Solar power seems to be the future of energy and will surely be further harnessed and used in many more fields than it is now.

My life-long dream has been to test out every gadget on the market! Considering the fact that I've rapidly destroyed almost every gadget I've had so far, I'm not inclined to owning something, so my ideal outcome would be to have a different gadget each month. I'm really into smartphones, wearables and tablets and I love Playstation and Xbox, I'm sure I'll beat you at your own game (after a month of training... or two)
Previous OPPO N3 will sport an aerospace grade metal build
Next Gorgeous platformer Ori and the Blind Forest gets new gameplay

Exoskeleton by Skeletonics at CEATEC 2014

We had talked about an invisibility cloak earlier, developed by researchers at Rive University. The ...