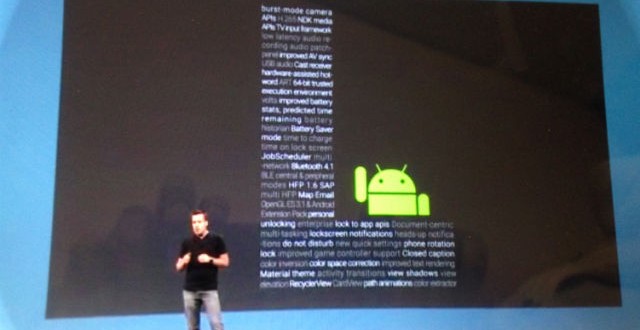 Earlier this year Google unveiled the next major update to its operating system, which is scheduled to launch sometime later this year. The latest iteration is currently still being called Android L and the actual name is only expected to be announced on launch day. Google has yet to confirm the launch date, but the latest reports suggests that Android L should arrive on November 1st or sometime close to that day. A preview build of the OS has already been available for some time for the Nexus 5 and Nexus 7, although rumor has it that it was also spotted on the Nexus 4. The next device in the popular series will be the HTC Nexus 9, which is scheduled to launch on October 16th according to Android developer Paul O’Brien.

Anonymous tipster: The HTC Nexus 9 will be launched on 16th October…

It is widely believed that the Nexus 9 will be the first device to run on Android L, but there is a small problem with this. The tablet will launch a couple of weeks sooner than the OS if rumors are to be believed. This means that the device might not run on the Android L from the get go and will only update at a later time. On the other hand, the Nexus 9 might only be announced on October 16th and launch on November 1st together with Android L. In any case, this is just speculation for now as Google didn’t announce anything as of yet. One thing is for sure though, the device is bound to launch in the near future and the OS will undoubtedly follow in due time.

The HTC Nexus 9 is rumored to come equipped with an 8.9-inch display complete with 1440 x 2560 resolution. Hardware-wise, we should find something along the lines of 3GB of RAM, 16GB of internal storage memory that can be further expanded up to 128 GB via microSD and we might also see an Nvidia Tegra K1 processor clocked at 2.3 GHz. Again, all of this falls into the rumor category until Google officially announces something so take it with a healthy pinch of salt for now. Stay tuned for all the latest news and updates.

I’m Load The Game’s co-founder and community manager, and whenever I’m not answering questions on social media platforms, I spend my time digging up the latest news and rumors and writing them up. That’s not to say I’m all work and no fun, not at all. If my spare time allows it, I like to engage in some good old fashioned online carnage. If it’s an MMO with swords and lots of PvP, I’m most likely in it. Oh, and if you’re looking to pick a fight in Tekken or Mortal Kombat, I’ll be more than happy to assist! Connect with me by email markjudge (@) loadthegame.com only
@@MarkJudgeLTG
Previous World of Warcraft: Warlords of Draenor system requirements revealed
Next BlackBerry Passport launch-event overview