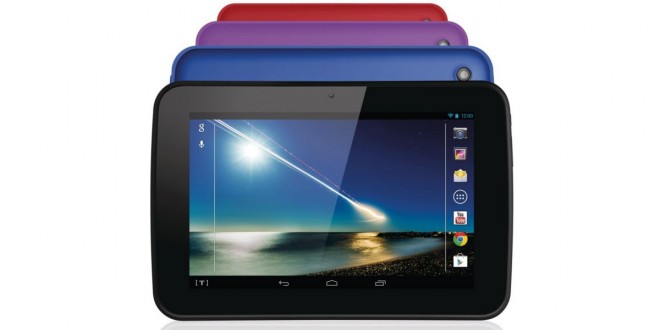 Tesco Hudl 2 to be launched on October 3

The Tesco Hudl tablet was the supermarket’s first attempt at a tablet and the company managed to release a pretty good 7 inch HD device that was well-received by their customers.The supermarket chain is launching the successor of the Hudl in the form of the Tesco Hudl 2.

The original Tesco Hudl has a 7 inch HD display with 1440*900 resolution with 242 ppi pixel density composed of an anti-smudge glass and scratch resistant coating. The Tesco Hudl is powered by a 1.5 GHz A9 quad core CPU running on 1 GB RAM and featuring a Mali 400 GPU. The tablet has 16 GB internal storage but you can use an up to 32 GB microSD card to expand that space. The Tesco Hudl has an average 3 MP rear and 2 MP front shooter, stereo speakers, HDMI port, Wi-Fi, Bluetooth, GPS, SDHC port and microUSB port and runs Android 4.2 Jelly Bean.

The Tesco Hudl tabletwill set you back about $120 at the moment and many are saying that it’s a great entry-level Android tablet. It won’t match up to the performance and design of other 7 inch compact tablets like the Kindle Fire HDX, Nexus 7 or iPad Mini, but for an entry level device, it does pack a reasonable punch. The drawbacks of the Tesco Hudl include a long charging time, Tesco bloatware, mediocre speeds and a pretty weak camera setup.

The Tesco Hudl 2 is to be announced on October 3, so we will surely see some improvement on Tesco’s second iteration of a tablet. The Tesco Hudl 2 will most likely have a bigger screen, probably an 8.4 or 8.9 inch screen with an improved display, better charging, a better design which will hopefully keep the soft-touch material from the back of the Tesco Hudl and even come with new accessories such as a dock, a stylus or a keyboard. The Tesco Hudl 2 will probably be available in various colors and maybe even hue configurations. We don’t know anything about what price Tesco is planning to set for the Tesco Hudl 2, but the main selling point of the original tablet was it’s low price so we expect Tesco to keep that tradition running.

My life-long dream has been to test out every gadget on the market! Considering the fact that I've rapidly destroyed almost every gadget I've had so far, I'm not inclined to owning something, so my ideal outcome would be to have a different gadget each month. I'm really into smartphones, wearables and tablets and I love Playstation and Xbox, I'm sure I'll beat you at your own game (after a month of training... or two)
Previous Galaxy Note Edge will be limited edition
Next Trials Fusion welcomes players to the abyss