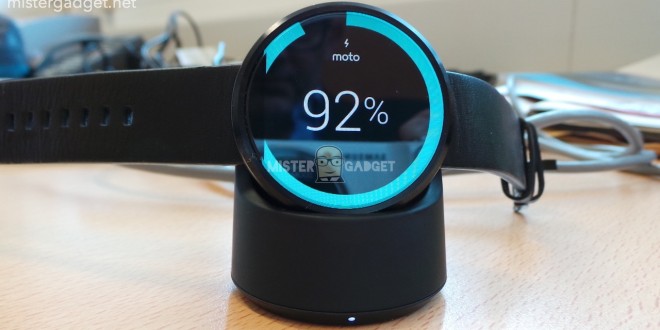 The Moto 360 smartwatch from Motorola has been one of the biggest hits at IFA Berlin this year, and had already stirred up a lot of interest before it was even launched. The Moto 360 is so popular because of its round display which has thinner bezels than its direct competitor, the LG G Watch R, which was also introduced at IFA Berlin this year. The only issue many were reportedly having with the Moto 360 was its short battery life.

The Moto 360 has been regarded as one of the best Android Wear smartwatches you can find on the market, although the LG G Watch R and the Apple Watch are worthy competitors as well. The Moto 360 is praised for its features and design, as well as for wireless charging and Bluetooth. Sadly, the Moto 360 still needs a smartphone to function correctly, unlike the Samsung Gear S or Sony SmartBand Talk. Nonetheless, most are impressed with what Android Wear coupled with Moto 360 can do.

On the other hand, many have complained about the battery life on the Moto 360, even though unless you choose a Pebble or Martian smarwatch, most wearables won’t last you more than a day of mixed use. Motorola has been quick to respond to these complaints and has issued a firmware update last week. The firmware update for the Moto 360 brought Bluetooth tweaks, new charging notifications and various bug fixes. There hasn’t been any mention of battery life improvements included in the changelog for the KGW42R firmware update that was rolled out for the Moto 360, but many are already reporting improvements.

Motorola must have felt cornered after reports came in that the battery in the Moto 360 was smaller than advertised, although the company stated that it was just an issue of labeling. Albeit the difference between the 320 and 300 mAH battery that was featured in the Moto 360 is small, it could count for a lot of juice. Nonetheless, it seems that the new firmware update has significantly improved the battery life on the Moto 360, with users reporting up to 5 hours more battery life available on the device. Ambient Light was one of the features that really drained the battery on the Moto 360 and the watch couldn’t last 12 hours with the feature turned on. Now, it seems that Ambient Light has been improved and doesn’t strain the battery as much.

We don’t know how widespread this improvement is, because some users haven’t experienced any major improvement in battery life, whilst others say that the Moto 360 holds out for much longer than before the update. Nonetheless, the fact that Motorola is rolling out updates for the Moto 360 is a good omen for both the OEM and Google’s Android Wear. Even though Android Wear is pretty much the only comprehensive wearable OS you can benefit from these days (Tizen is an option, too), it doesn’t hurt to see it being further improved and developed.

Have you experienced any battery life improvements after updating your Moto 360 to the latest firmware? How did the update effect your device and what differences did you notice?

My life-long dream has been to test out every gadget on the market! Considering the fact that I've rapidly destroyed almost every gadget I've had so far, I'm not inclined to owning something, so my ideal outcome would be to have a different gadget each month. I'm really into smartphones, wearables and tablets and I love Playstation and Xbox, I'm sure I'll beat you at your own game (after a month of training... or two)
Previous Xbox One is the first modern gaming console to be launched in China
Next OnePlus 2 will launch in Q2 or Q3 of 2015, likely to run on Android L