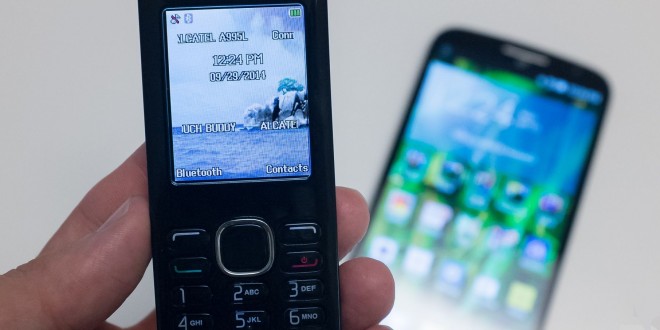 Alcatel has come up with a new trend with the announcement of the Alcatel Pop Mega phablet: the companion phone. The Alcatel Pop Mega is a mid-range phablet tht will retail for around $250 at TracFone and will come “equipped” with a Buddy in the box. 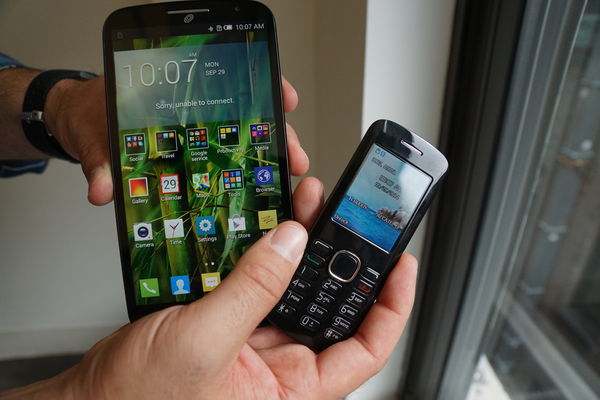 What’s this about, you may ask. Well, Alcatel has thought that people who would like to sport a phablet, might be inconvenienced sometimes by its large size and would rather take their most important calls or write messages on a smaller device that could be paired with the main Alcatel Pop Mega. What Alcatel did might seem a bit of a waste of materials and most of you probably won’t stomach the idea very well, because why would someone want to carry two devices in order to use only one of them at a time?

The Alcatel Pop Mega comes with a Buddy phone in the box, which looks like a simple phone from 10 years ago, with a color screen and number pad and it pairs to the phablet via Bluetooth. The Buddy will be able to relay all your phone calls, messages and notifications from the Alcatel Pop Mega, allowing you to keep the phablet in your backpack, and the Buddy in your pocket. If you think about it, this would be an excellent option for travelers around the world, who would feel safer using a basic phone when on unfamiliar streets.

The Alcatel Pop Mega isn’t much of a flagship, though, sporting a 6 inch screen with a 960*540 resolution, Android 4.3 and a 3400 mAH battery. The Alcatel Pop Mega is powered by a quad-core Snapdtagon CPU clocked at 1.2 GHz and backed by 1 GB RAM and 4 GB internal storage. It also has an 8 MP rear camera and a 2 MP selfie shooter. We can safely say that the Alcatel Pop Mega falls into the mid-range phablet category. It does rival the ZTE Z Mac, but it does feel inferior to ZTE’s newest 5.7 inch phablet, which has a 720p display and is priced the same.

The Alcatel Pop Mega’s selling point is the Buddy, which is a small remote-like feature phone with a 4.4 inch height, 1.7 inch width and 0.36 inch thickness and looks just like any other feature phone with a 2 inch display. The Buddy is conveniently small and thin and would fit in any pocket out there, so it’s not an entirely bad idea. Although I think the whole idea is a waste of materials and resources, it might seem like a useful pair for some.

Alcatel is also thinking about launching two more Alcatel Pop phones next month, a 4 inch Pop Star which will retail for %150 and a 5 inch model which will probably retail for around $200. The whole companion phone idea isn’t unheard of, with HTC releasing the HTC Mini+ with a similar function last year. You can imagine that these companion phones might come in handy for tablet users, rather than phablet users. 3G and SIM card enabled tablets would be a better category to market the Buddy with, in my opinion. Do you think having a companion phone is a good idea or is it just a bloat-device that you would find inconvenient?

My life-long dream has been to test out every gadget on the market! Considering the fact that I've rapidly destroyed almost every gadget I've had so far, I'm not inclined to owning something, so my ideal outcome would be to have a different gadget each month. I'm really into smartphones, wearables and tablets and I love Playstation and Xbox, I'm sure I'll beat you at your own game (after a month of training... or two)
Previous Dreamfall: Chapters Book One release date announced
Next PayPal and eBay to end partnership in 2015