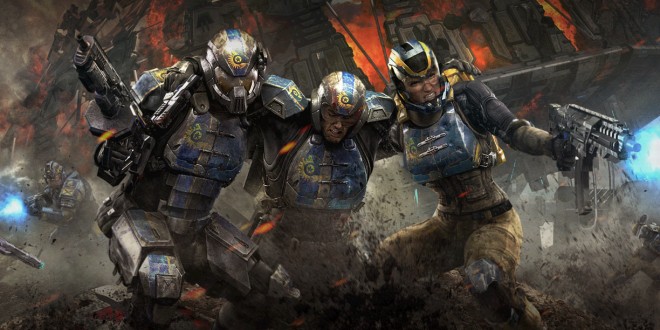 PlanetSide 2 will receive today a massive update that will include a series of bug fixes, extensive gameplay updates and an exclusive ‘Nanite of the Living Dead’ Halloween event, as developers announce on the game’s official forum. Game developers are clearly all in for fun, interactive additions to PlanetSide 2 so players can go after some genetically modified “space pumpkins” which accidentally landed on Auraxis. “Due to a recent “mix-up”, some of our latest samples were shipped down to the surface of Auraxis instead of the testing facility that they were intended for, because Helen in Order Processing can’t seem to separate her personal life from her job long enough to get her assignments sorted.” PlanetSide 2 creators are also “bringing out of the closet” a lot of new seasonal masks to be worn during ‘Nanite of the Living Dead’ events.

Here is a small taste of what’s in store:

PlanetSide 2 has also been announced for PlayStation 4, but with no official release date just yet. The game is a genuine MMOFPS, with massive combat on a scale never before seen in stunning, breathtaking detail. Battles take place not between dozens of troops, but thousands; with air and ground vehicles slugging it out alongside squads of troops. Whether in open fields, tightly-packed urban centers or enormous structures, winning requires strategic teamwork and a quick trigger finger. To find out more about this update, visit the game’s official forum.

I'm Razvan, a sports and first-person shooter enthusiast. I've always loved writing, even more so when it involves games. When I'm not playing on my PS3 or writing, I like to run exhausting cardio workouts, play soccer, watch a good movie, or read a good book.
Previous iPhone 6 vs Xiaomi Mi 4 – Apple vs Apple of China
Next Moto X (2014) vs Lumia 830 – Recently launched affordable flagships

Destiny takes the crown as the most expensive game ever made