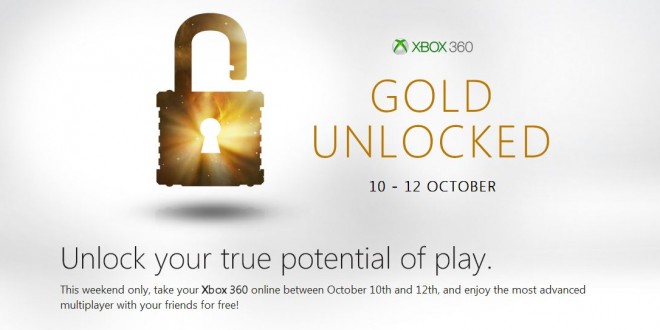 Xbox Live Gold is free this weekend for Xbox 360 owners

Microsoft has a great deal for anyone with an Xbox 360 and a desire to check out the Xbox Live Gold program. The service is available at no cost whatsoever from Friday, October 10th until Sunday, October 12th. During this period you can go online and get in on the awesome multiplayer action with games like Destiny, Titanfall, Halo and more, depending on what Xbox 360 titles you own of course. Alternatively, you can try out some free-to-play games this weekend such as Warface, World of Tanks, AirMech Arena or Happy Wars. Xbox Live Gold also gives you discounts of up to 50-75 percent for a number of games in the Xbox Store. For more information on the Xbox Live Gold free weekend check out this page.

As you may or may not know, Xbox Live Gold members get access to free games each month. Currently Xbox 360 owners are still able to play Battlefield 2: Bad Company free of charge until October 15th. Then, starting with October 16th Gold members will receive access to Darksiders 2 in which you play as the horseman Death and are on a quest to avenge your brother, War. “Darksiders II follows the exploits of DEATH, one of the four horsemen of the Apocalypse, in a weaving tale that runs parallel to the events in the original Darksiders game. This epic journey propels DEATH through various light and dark realms as he tries to redeem his brother WAR, the horseman who was blamed for prematurely starting the Apocalypse in Darksiders.”

The free Games with Gold for November have not been announced yet, but we should hear more about them sometime later this month. Until then make sure you don’t miss out on the free Xbox Live Gold weekend and stay tuned as we bring you all the latest news and updates.

I’m Load The Game’s co-founder and community manager, and whenever I’m not answering questions on social media platforms, I spend my time digging up the latest news and rumors and writing them up. That’s not to say I’m all work and no fun, not at all. If my spare time allows it, I like to engage in some good old fashioned online carnage. If it’s an MMO with swords and lots of PvP, I’m most likely in it. Oh, and if you’re looking to pick a fight in Tekken or Mortal Kombat, I’ll be more than happy to assist! Connect with me by email markjudge (@) loadthegame.com only
@@MarkJudgeLTG
Previous Assassin’s Creed Unity’s controls will take “a few hours” to get used to
Next Microsoft committed to supporting the PC more