2014 will definitely be remembered as a peculiar year for gamers. On the one hand, we’ve got titles which have been hyped to no end, only to end up disappointing the majority (e.g. Titanfall, Watch Dogs, Destiny). On the other hand, there have been games which continuously flew under the proverbial radar, only to turn out better than anyone would have expected (e.g. Middle-earth: Shadow of Mordor). After investing about 15 hours into Styx Master of Shadows, I can honestly say Cyanide Studio’s latest is somewhere in the latter extreme.

Being haunted and almost driven insane by various thoughts and voices which aren’t his, Styx is determined the only way to get rid of the supposed madness is to get to the World Tree inside the Akenash Tower and remove its ‘heart’. This journey sees players visiting the entire said tower, which basically looks like a giant castle up in the clouds. Think Bioshock: Infinite, only replace the entire city with said fortress, spanning sewers, dungeons, and even high-class chambers like bedrooms and libraries. Sadly, besides a neat twist happening about mid-way into the game, the rest of the story isn’t anything to write home about. I was also quite annoyed by the final “boss” fight, in addition to the repeated environments towards the end. They reminded me of Devil May Cry 4.

Styx’s small size isn’t just to show-off a protagonist different from the usual generic, tall, white male – although he is male and he also swears quite a lot. Taking the role of one such goblin, players are able to hide under tables, various containers like wardrobes or chests, and even ventilation-like holes in walls and floors. Avoiding soldiers is usually done by extinguishing torches – you can even collect sand which is used to extinguish them from afar – in addition to peeking inside upcoming rooms before unlocking their doors (assuming you don’t find an alternative way which usually involves the ceiling). Additionally, walking on soft surfaces like carpets allows players to safely sneak past enemies. 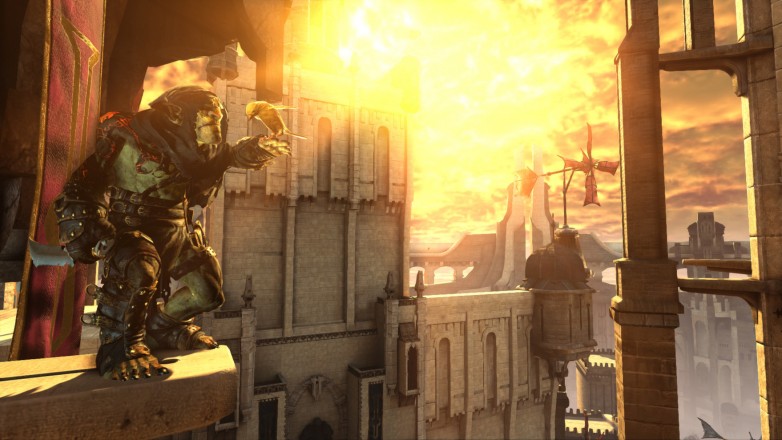 Styx Master of Shadows provides players with open-ended environments, allowing plenty of room to sneak, kill, hide, and jump from rooftop to rooftop and wall to wall. The core platforming mechanic can be a little finicky at times, requiring about one level or two to get used to it – trying to hang from a ledge proved notably tricky. In many situations during any level, reaching a certain point can be done taking various paths; some are more dangerous than others, and those less risky require careful observation of the environment. Experimenting is a must, which perfectly suits Styx Master of Shadows’ type of genre.

Collecting amber along the way helps Styx use his special abilities. One said power allows him to create a clone which can be used to reach otherwise-inaccessible areas or cause distractions – I would also often use it to attract a guard’s attention and lead him underneath a huge chandelier or a crate, after which I would bring it down on the poorly-aware grunt. Another ability is called ‘amber vision’, which allows Styx to spot enemies, hiding places, or special marks on the walls (think Batman’s Detective Mode). Finally, our favourite goblin can even turn himself invisible for a short period. Sure, through trial-and-error, one could finish the entire game without using any of these abilities (except when the level-design dictates you otherwise), but I highly advice you to make use of them; they’re as useful as fun to use.

After completing each mission, you are rewarded with a number of skill points to use (I’ll get to those in a bit) based on your performances. Of course, this being a stealth-focused title, Styx Master of Shadows encourages you to not raise any alarms and leave everyone alive. Each mission also includes a relic for collecting purposes, and players can find them by following a given clue. The rewarding system accompanied by trophies/achievements is a great way to increase the replay value, as gamers will certainly come back just to achieve that perfect play-through.

After each mission, Styx returns to his hideout. Here, players are able to replay missions and spend the previously-mentioned skill points. The upgrading system is simple, although a bit useless. You are able to spend points into making Styx more agile, stealthy, carry more vials/knives, in addition to upgrading your clone and amber vision with various new tools – for instance, one such upgrade allows your clone to kill from a hiding place. Additionally, players can also unlock new killing mechanics like sending soldiers to their doom by grabbing them from below or even air-assassinating the poor grunts, akin to the Assassin’s Creed series. The air-assassinating technique is my personal favourite, as it always allows me to descend without taking damage and killing someone. 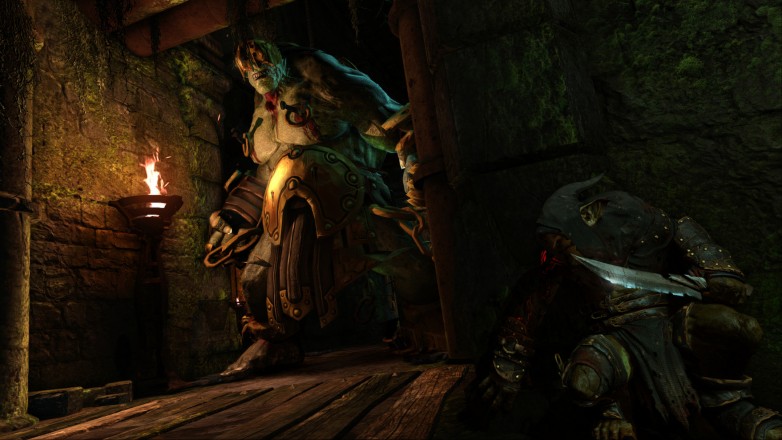 One feature I honestly cannot stand is the fact that, when spotted and engaged, the game forces players into a sort-of quick-time-event in which they have to parry their enemy’s attacks, after which go in for the kill. Most of the times, the mechanic simply doesn’t work. Sure, as long as you’re not directly engaged, you can still escape and wait for everyone to calm down, but get too close and you’ll most likely have to restart from a check-point/quick-save. Not to mention the fact that it’s ridiculous how guards wait for their turn to attack Styx. Not to also mention the fact that the enemy A.I. sometimes acts downright moronic.

If I were to compare it to other games, I would say Styx Master of Shadows is a combination between the Hitman games and Dishonored. Speaking of Hitman, Styx can also hide bodies inside previously-mentioned containers, and just like in Agent 47’s adventures, putting one such corpse inside prevents you from hiding in it.

Crude facial animations coupled with the occasional missing shadows clearly point out the fact Styx Master of Shadows was made using the Unreal Engine 3. Although it loses some immersion points when it comes to buildings and shadows at a considerable distance, the game looks decent up-close. Objects in the environments like human characters could have used a lot more work, though; some of them look like they came from the PlayStation 2 era.

Styx Master of Shadows won’t impress anyone with its presentation, A.I., or the fact that its story and characters are barely passable by today’s standards. Nevertheless, for the game’s price, Cyanide’s latest is a decent offer for gamers looking forward to several hours of infiltrating rooms, sneaking and killing guards, in addition to creating just one more clone to mess with the A.I.

I’m Load The Game’s co-founder and community manager, and whenever I’m not answering questions on social media platforms, I spend my time digging up the latest news and rumors and writing them up. That’s not to say I’m all work and no fun, not at all. If my spare time allows it, I like to engage in some good old fashioned online carnage. If it’s an MMO with swords and lots of PvP, I’m most likely in it. Oh, and if you’re looking to pick a fight in Tekken or Mortal Kombat, I’ll be more than happy to assist! Connect with me by email markjudge (@) loadthegame.com only
@@MarkJudgeLTG
Previous Microsoft CEO Satya Nadella believes that women shouldn’t ask for a raise because that’s “good karma”
Next Galaxy S6 release date, specs and rumors 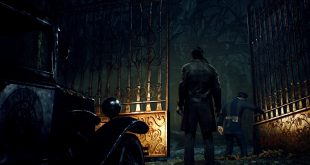 Call Of Cthulhu Release Date Set; Out In October

Styx: Master of Shadows gets a launch trailer

Cyanide Studios, the developer behind “Of Orcs and Men”, released the launch trailer for their ...