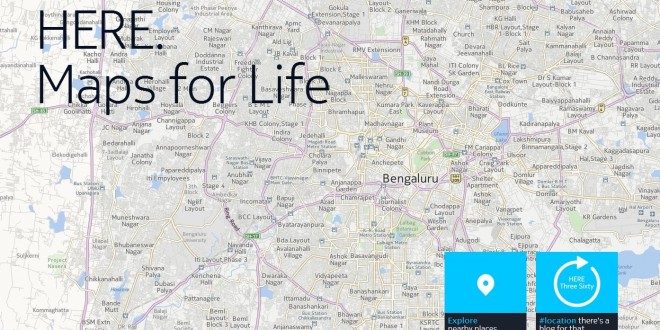 Nokia HERE maps available for all Android 4.1 and above devices

We had previously learned that Nokia would be making its famous Nokia HERE maps available for Samsung Galaxy devices such as the Galaxy S5 and Galaxy Note 4, and  an APK that could be installed on most Android running devices was also leaked so Android users have already had the chance to try out Nokia HERE maps on their devices. Samsung Gear smartwatches and fitness trackers will also be benefiting from Nokia HERE maps in the near future. When Nokia first announced that it would begin distribution of the Nokia HERE maps app, the company said that it would only be available for Galaxy smartphones running Android and Gear watches running Tizen. But since then, it seems that Nokia has changed its mind.

Even though we had previously heard that Nokia HERE would be available in the Google Play Store and Galaxy App Store, it seems that Nokia decided to distribute it itself. You can download Nokia HERE maps from the company website and you will be able to sideload it onto any Android 4.1 and above running smartphone or tablet. The new version of the app Nokia has put up for download is build 175, which is slightly different than the leaked apk which was build 174.

The best feature Nokia HERE maps has is that you can get directions from point X to point Y without having an internet connection, which isn’t possible with Google Maps or Apple Maps. With Nokia HERE, you’ll be able to create an account and download maps and save collections in case you will be needing them for offline use. Much like Google Maps, Nokia HERE lists the duration of the journey, number of miles, main routes and any potential traffic delays, if you’re not in offline mode. You can also see speed limits and receive notifications if you’ve crossed them, as well as voice guidance.Many are excited to see Nokia HERE on Android and we’re curious to see how users will appreciate the offline mode which will certainly come in handy when traveling and wanting to bypass high data roaming costs. Although saving maps to your device will require a fair amount of space, it still is a welcome feature that many will surely benefit from.

My life-long dream has been to test out every gadget on the market! Considering the fact that I've rapidly destroyed almost every gadget I've had so far, I'm not inclined to owning something, so my ideal outcome would be to have a different gadget each month. I'm really into smartphones, wearables and tablets and I love Playstation and Xbox, I'm sure I'll beat you at your own game (after a month of training... or two)
Previous Xbox One Digital TV Tuner hits Europe
Next Considerable amounts of content leaked for Destiny’s upcoming major patch