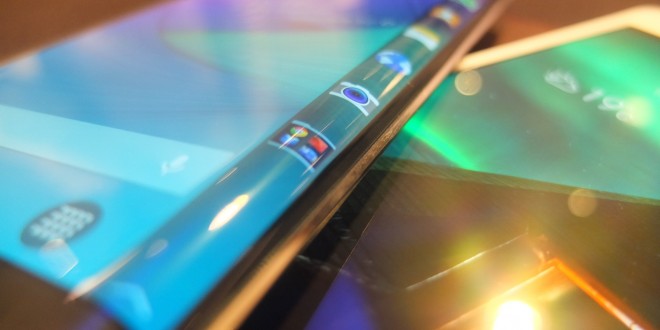 The Galaxy Note Edge is the more controversial and unique variant of the Galaxy Note 4, featuring a hanging display on the edge of the phone. That display can be used by various apps to display actionable notifications, weather information, calendar reminders, sports scores, stock information as well as act as a ruler. The main difference between the Galaxy Note Edge and Note 4 is that the former doesn’t feature the metal frame Samsung finally decided to include in its handsets. Otherwise, the South Korean variant of the Galaxy Note Edge features the octa core Exynos CPU, backed by 3 GB RAM, 32 GB internal storage expandable to 64 GB via microSD card slot, a 16 MP camera equipped with optical image stabilization, a 3.7 MP front camera and a massive 3000 mAH battery. An IR blaster, LTE Cat 6 and Bluetooth 4.1 are also featured on the handset.

While the Note Edge is already available in two major markets, Japan and South Korea, there has been no confirmation from Samsung that the device will make it to European or U.S. markets. Seeing as Samsung said that the Edge will be available in very limited numbers, we might be confronted with a device especially made for Asian markets. Since there’s no confirmation on that, we can still hope that the Galaxy Note Edge will make it to U.S. shores so that we can get our hands on the unique device. We could also speculate that even if the Galaxy Note Edge won’t be available for purchase in the U.S., Samsung might organize some sort of competition or raffle in order to let American citizens experience the new edge-display that has everyone riled up.

My life-long dream has been to test out every gadget on the market! Considering the fact that I've rapidly destroyed almost every gadget I've had so far, I'm not inclined to owning something, so my ideal outcome would be to have a different gadget each month. I'm really into smartphones, wearables and tablets and I love Playstation and Xbox, I'm sure I'll beat you at your own game (after a month of training... or two)
Previous Cheating in Hearthstone will not be tolerated says Blizzard as it bans thousands of players
Next Youtube will allow those with a subscription to watch videos without ads