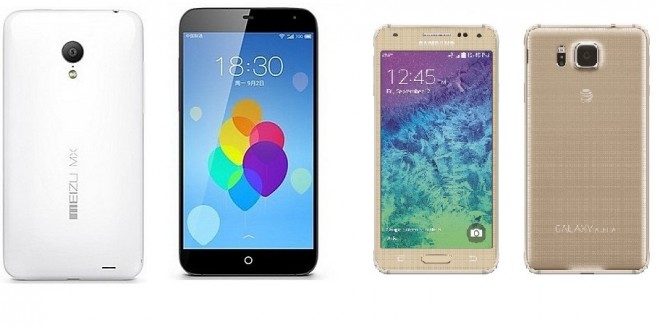 The Samsung Galaxy Alpha is one of the most appreciated and raved about Samsung phones of the year, mainly because the company has finally introduced something new in its design: metal. The Galaxy Alpha is the first Samsung phone with a metal frame and many have praised the fact that the company finally decided to listen to its customers who were asking for a metal design for years. The Meizu MX4 is the flagship of the company which launched it into the viewpoint of many tech enthusiasts, because it offers great high-end specs for an affordable price. While the Galaxy Alpha is more of a mid-range smartphone and has a hefty price, the Meizu MX4 is a cheaper powerhouse that you might be able to import from China.

The Galaxy Alpha design includes the metal frame everybody is glad to see on a Samsung phone. Samsung also decided that based on the success of the metal iteration of a mid-ranger, it would launch a new smartphone line based on the Galaxy Alpha. The Galaxy A line is supposed to bring three new smartphones, the Galaxy A3, A5 and A7, out of which the first two have already been announced and they are quite promising, with metal unibodies. The Galaxy Alpha seems to be among the most popular handsets on the market right after the Galaxy S5 and Galaxy Note 4. While Galaxy Alpha specs are mostly mid-range, the selling point of the pricey handset is its design, which looks great. The Meizu MS4, on the other hand, is cheap flagship with excellent high-end specs. The problem with the Meizu MX4 is that it comes from a company that is almost unknown to U.S. customers and seems less trust-worthy than Samsung. Let’s see what the specs say.

While Galaxy Alpha specs seem inferior to those of the Meizu MX4, Samsung’s mid-ranger with a metal chassis does offer more features than the MX4 does. While the Meizu MX4 also has a metal frame, it incorporates a rounded back and ergonomic design, with an unfortunate button placement. Another let-down with the MX4 is that it doesn’t have capacitative buttons aside from the home button, neither does it sport on-screen buttons. That means that your back button is a swipe-up on the home key, which we found cumbersome at times during our time spent with the Meizu MX4. The Galaxy Alpha, while it does have more features, it offers less performance and lower camera performance than the Meizu MX4. The Galaxy Alpha camera isn’t bad, but the Meizu MX4 sensor is quite superior. As far as bang for buck goes, the Meizu MX4 is definitely a better deal if you can manage the weird button placement (or lack thereof). On the other hand, the fact that the Meizu MX4 isn’t compatible with U.S. LTE bands is definitely a no-no. Nonetheless, the Meizu MX4 Pro is on the way, and it will only be a slight price-jump, a big spec jump from the Meizu MX4.

My life-long dream has been to test out every gadget on the market! Considering the fact that I've rapidly destroyed almost every gadget I've had so far, I'm not inclined to owning something, so my ideal outcome would be to have a different gadget each month. I'm really into smartphones, wearables and tablets and I love Playstation and Xbox, I'm sure I'll beat you at your own game (after a month of training... or two)
Previous Nvidia is readying its Geforce GTX 980 8GB for an imminent release
Next Lenovo Yoga 3 Pro vs Asus Transformer Book T100