With the release of the high-end Nvidia Geforce GTX 970 and GTX 980 Maxwell cards, numerous giant manufacturers have developed their own custom versions of these powerful Maxwell GPU cards. MSI has a history of building state of the art gaming cards, and we were expecting to see some of their craftsmanship in Nvidia’s top of the line models. Well, it seems that MSI is setting up a limited edition gaming graphics card: the MSI GTX 970 Gold Edition. As both GTX 970 and GTX 980 showcased impressive performance at low wattages, MSI developers recognized the GTX 970’s potential and decided to employ some in-house innovations to give this graphics card a stunning boost in performance. KitGuru is the first publication to get a glimpse of the MSI GTX 970 Gold Edition at Beat IT 2014, and by the looks of it we are in for a great gaming card. 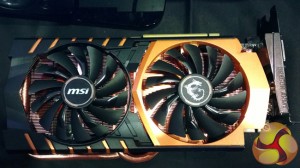 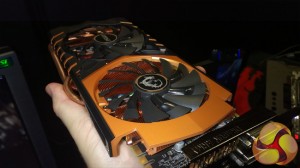 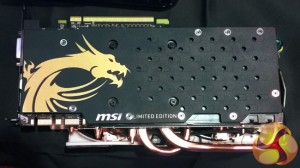 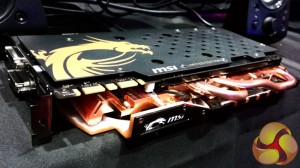 MSI engineers said they were working around the clock to deliver a more appealing graphics card in terms of aesthetics, and a more efficient one in all aspects. The MSI GTX 970 Gold Edition features higher clock speeds which were accomplished by pairing a solid backplate with some specially treated copper to create a heatpipe/fan combo which MSI says is the best on the market. MSI seems to be thinking outside the box for a change and this also reflects on the cooling solution fitted on the GTX 970 Gold Edition, the Twin Frozr V cooler with the above mentioned custom works. KitGuru feels the same: “We love it when companies push the boat out on design. Twin Frozr has been a good cooler already up to now – and it looks even better in this gold configuration at Beat IT 2014, when coupled with a special set of copper heatpipes.”

MSI has certainly built one of the best Geforce GTX 970 cards to date: the GTX 970 Gold Edition – a graphics card that will be capable of running any title out there in ultra high settings. While MSI is not going with the current Maxwell GPU for their high-end Lightning cards, as engineers are waiting for a faster chip, the company might turn its attention to the GTX 980 and release a Gold Edition version of this top model as well. Stay tuned for more details on the GTX 970 Gold Edition.

I'm Razvan, a sports and first-person shooter enthusiast. I've always loved writing, even more so when it involves games. When I'm not playing on my PS3 or writing, I like to run exhausting cardio workouts, play soccer, watch a good movie, or read a good book.
Previous The first round of the Starcraft 2 WCS Global Finals has concluded
Next Na’Vi takes the D2CL crown at Dreamhack Bucharest Masters 2014

AMD seems to be making all the right moves in the last couple of weeks. ...