Ubisoft’s upcoming action-adventure blockbuster, Far Cry 4 has been getting a lot of attention lately, and now a recent leak reveals the game’s map and a whole bunch of in-game animal species. By the looks of it, the map of Kyrat looks very similar to what we’ve seen in the previous installment. Just a few weeks to go now and this year’s most anticipated first-person shooter will hit store shelves in a mission to engage players in a unique action packed adventure in the heart of the Himalayas. You’ll be guiding Ajay Ghale through many exciting and dangerous assignments that will culminate with the ultimate quest to punish Pagan Min for all his misdeeds.

The leak in question reveals 6 different biomes and economic regions and a wide range of wildlife you’ll be able to hunt in order to get new upgrades for your gear. On top of the in-game animal species such as elephants, yaks, rhinos, tibetan wolves, etc., 20 different outposts are outlined. Each one of the 6 color tones most likely indicate the type of climate encountered in a given region of Kyrat. While the map itself might look a little bit small, it is expected to be slightly more complex and spacious compared to Far Cry 3. At this time, there are no indications that this is the complete map of the game or if we will be seeing a more extensive game environment. But rest assured, Far Cry 4 will take free roam exploration to a whole new level. In the meantime, take a closer look at the leaked map of Kyrat. 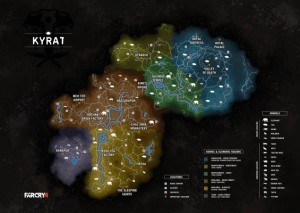 Far Cry 4 will surely feature more interesting locations and places to explore than in the previous title, and players will be in for a fun and unforgettable adventure. Far Cry 4 is set to land this November 18th in North America and November 20th in Europe. The title will be available on PC, PS4, PS3, Xbox One and Xbox 360.

I'm Razvan, a sports and first-person shooter enthusiast. I've always loved writing, even more so when it involves games. When I'm not playing on my PS3 or writing, I like to run exhausting cardio workouts, play soccer, watch a good movie, or read a good book.
Previous Microsoft give-away – Lumia 830 + Fitbit Flex
Next Dota 2 is now being studied in schools