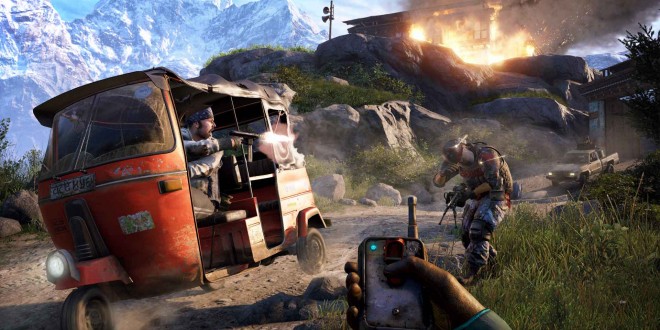 Far Cry 4 glitches have been causing multiple problems for players of the recent title on both PlayStation platforms. The fixes of a recent patch distributed cover a wide variety of potential bugs in the game. Some of the patch notes include: random crashes on both multiplayer and single player modes, match stability in multiplayer to decrease lag, progression page issues in story mode where the player would not be able to proceed, aiming with the machine gun, and ensuring radio calls don’t drop the audio.

Puzzlingly the patch does not appear to address falling through the map, which happened to me twice in the story mode. It would happen when I would attempt to use a glider only to end up falling through the map and seeing it from underneath. I could use the wingsuit to soar for a bit before the game reset itself and loaded me at the last checkpoint. Some other minor issues I ran into during my 20 hours with Far Cry 4 were: gliders being unaffected by gravity and refusing to allow me to use them, climbing onto a roof only to have the game reset the climbing animation once I completed it, and a very strange issue where I would be pushed forward while standing and not touching the controller. None of these issues were game breaking or blocked my progression or enjoyment with the game thankfully. Far Cry 4 glitches are a bit strange to encounter, especially falling through the map twice. Most of the time when I noticed the errors were becoming more frequent I would save and restart my system in order to avoid them. This patch should hopefully fix these issues as well.

The Far Cry 4 glitches appeared to only effect PlayStation 3 and 4 users. Another puzzling issue was that players were told “Game Data is corrupt. Please delete FC3 game data.” referring to the previous game, Far Cry 3. However, this issue was also reported to affect those who had never played Far Cry 3 before. This glitch was only encountered on digital copies on the PlayStation 3. Ubisoft’s response was for players to delete the game and save data and download the digital version again from the PlayStation Store.