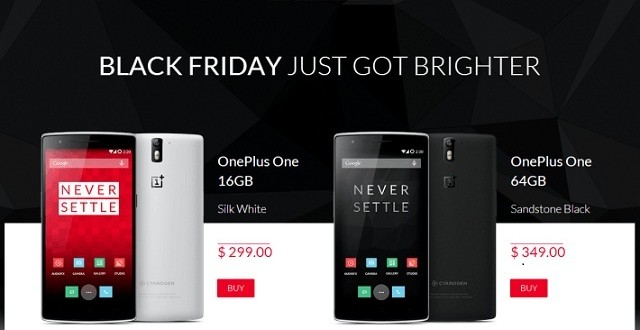 OnePlus One can be purchased without an invite on Black Friday

The highly sought after OnePlus One “flagship killer” smartphone is now available for purchase without an invite as part of its manufacturer’s Black Friday promotion. Now, I’m sure that this might not seem like a big deal to some considering that so many other companies are offering all sorts of crazy discounts for their products during this period. However, for the most part you can’t just simply buy this phone like you would others as you usually need an invite to do it. It’s worth mentioning that the OnePlus One is available at its usual price of $300 for the 16 GB version and $350 for the 64GB model, so there are no discounts here.

Aside from two storage configurations, you also have two colors to choose from: Sansdstone Black and Silk White. Now, while the company is allowing you to just go ahead and purchase a OnePlus One smartphone, it doesn’t mean that you’re actually going to be able to. This is due to the large amount of people who are pushing and shoving to get their hands on the device as many have been waiting for ages for an opportunity like this. If you do manage to place and order however, OnePlus says that your flagship smartphone will arrive before December 25th. Although the OnePlus One itself isn’t discounted for Black Friday, you will able to find cheaper than usual accessories for the device as part of the promotion.

Discounted items include: earphones at 20% off, screen protector at 10% off, flip cover and clear case at 20% off, and more. OnePlus also says that this promotion will only last as long as supplies do and we’re probably looking at a pretty limited stock, so you better hurry if you’re interested. You can find more information and are able purchase the OnePlus One and its accessories from this page.

I’m Load The Game’s co-founder and community manager, and whenever I’m not answering questions on social media platforms, I spend my time digging up the latest news and rumors and writing them up. That’s not to say I’m all work and no fun, not at all. If my spare time allows it, I like to engage in some good old fashioned online carnage. If it’s an MMO with swords and lots of PvP, I’m most likely in it. Oh, and if you’re looking to pick a fight in Tekken or Mortal Kombat, I’ll be more than happy to assist! Connect with me by email markjudge (@) loadthegame.com only
@@MarkJudgeLTG
Previous Hyrule Warriors DLC Launch Trailer Shows Off Twili Midna
Next Razer Nabu will finally be available to purchase starting next week