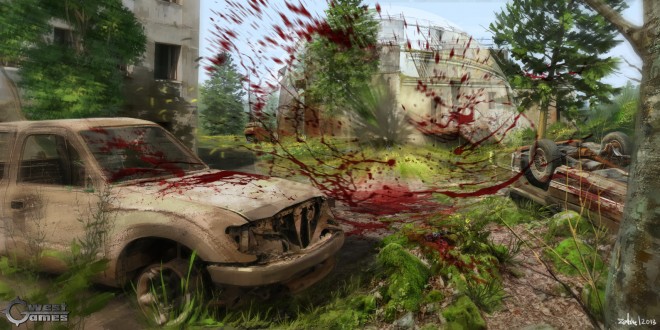 Stalker Apocalypse is a relaunch of West Games’ Areal Kickstarter. Their previous crowdfunding effort, Aereal, was shut down in July of 2014. The kickstarter project asked for $50,000 in order for West Games to create a spiritual successor to S.T.A.L.K.E.R. They claimed to be ex-S.T.A.L.K.E.R. developers, but that was shot down by Valentine Yeltyshev, who was a part of the original  S.T.A.L.K.E.R. team. His explanation is that they were working on a STALKER game, but it was a flash game, to be played in an internet browser. They worked on it for a bit but never completed due to GSC Gameworld being shut down in December of 2011. Yeltyshev explained GSC Gameworld probably won’t take legal action, stating, “That project was never finished. There were mistakes. But the guys at West Games, that was the STALKER project they were working on – a flash game. So when they promoted themselves as having worked on STALKER, I was quite surprised. We would definitely win the legal action against them, but we won’t start it. They used a lot of the ideas from STALKER… I don’t know what they were thinking, starting that. I haven’t heard from them for quite a while.”

However this hasn’t stopped West Games from using the theme of S.T.A.L.K.E.R. for its projects. Aereal was a source of much criticism during its entire Kickstarter campaign. The low funding goal of $50,000 raised doubts as their ambition extended way beyond that price tag. Various internet users gathered together to dispute West Games’ various claims. It all dragged out in a long battle of words until Kickstarter canceled the project themselves after two large donations from mysterious users. Kickstarter would not comment but many believed that it was canceled due to the controversy surrounding accusations of recycling free assets and fraudulent deposits. Instead, West Games started a funding campaign on its own site, and also launched a World Wide Funder project that has raised $15, 341 of $600,000. The new project on World Wide Funder is titled Stalker Apocalypse and while Stalker and S.T.A.L.K.E.R. are different trademarks, the use of bolts after each letter in Stalker Apocalypse’s logo could confuse consumers. This is what Yeltyshev refers to when he said that they could easily win in court if it came to that. However since the launch of Stalker Apocalypse at the beginning of December, it has only raised 3% of its intended goal and doesn’t appear to be going anywhere further. The deadline is March 11, 2015, so time will tell whether or not this game will even begin development and if GSC Gameworld will attempt to make some money off of its success.

West Games has finally released prototype footage of their post-apocalyptic title Areal. It shows a ...