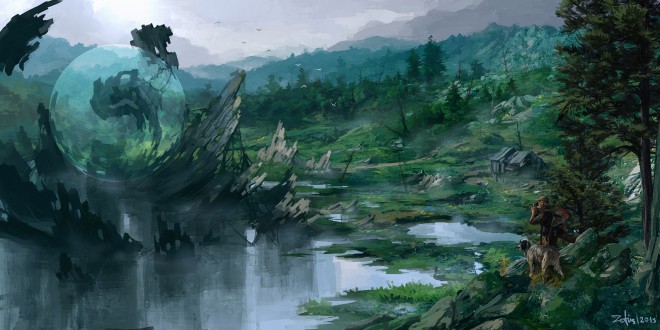 West Games has finally released prototype footage of their post-apocalyptic title Areal. It shows a man moving through not-so-friendly forest accompanied by an eerie soundtrack. It is the first time the developer has shown footage of the game, previous videos had only featured basic Unity assets along with video taken from previous S.T.A.L.K.E.R. games. As you might expect from a game that is still looking for funding, the Areal reveal trailer released is described as being “early prototype footage that’s not representative of Areal’s final quality.” The video was reportedly made in just two weeks and the development team has stated that they hope it will quell some of the fears that people had about the project.

The video might well help to get more people interested in Areal, after what was a disastrous Kickstarter launch. Almost immediately after the developers launched their crowdfunding campaign they were accused of stealing assets from other games while others attacked the claim that they had previously worked on the S.T.A.L.K.E.R. series. Other concerns were raised over the fact that the team was only looking to raise $50,000, a figure that would in no way fund such a massive project. Most of these concerns have since been acknowledged and refuted by West Games in a series of updates on their Kickstarter page. The news that a leading designer from S.T.A.L.K.E.R. had also joined the team as a producer also calmed fears that Areal was a scam.

Areal was first announced in June and was described as a spiritual successor to the cult series S.T.A.L.K.E.R. that would incorporate many elements of the first-person shooter. The developers are basing the plat on a book of the same name by author Sergey Tarmashev. They have so far managed to raise $37,340 of their $50,000 goal with just six days of the campaign remaining.

Freelance writer with a love for gaming. Have owned pretty much every console and handheld from the last 15 years. When I'm not writing about games, which I am most of the time, I tend to be reading, writing about sport, binge watching shows on Netflix...or playing the odd video game.
@nathanpgibson
Previous id Software reveals DOOM gameplay at QuakeCon 2014
Next The Evil Within releases earlier than previously announced

Areal, a post-apocalyptic game described as a spiritual successor to the cult hit S.T.A.L.K.E.R. series, ...