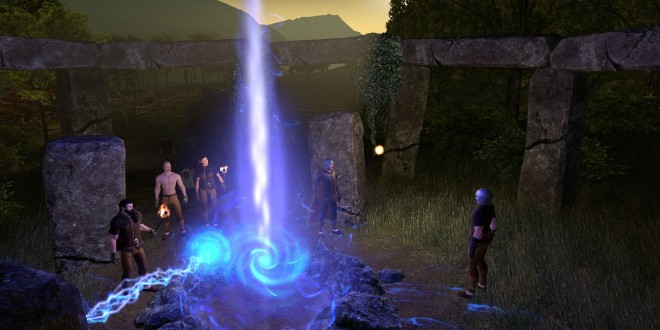 Shroud of the Avatar developer reveals some upcoming updates

Shroud of the Avatar Releases Plans for 2015

Shroud of the Avatar is currently in a beta phase. Now, the game’s developer, Portalarium, has released the game’s update schedule for the first few months of 2015.

Portalarium has released Shroud of the Avatar’s upcoming schedule for 2015. The first update, which will release on January 29th, will add a few things. The game will be adding a biome, and will expand the mainland. Players will be able to make use of banks to store items, and those that pledge towards the game will have their rewards in the bank from the beginning. The weight of items will now factor into how much a player can carry, with their carrying capacity being determined by their strength. There will also be more cooking and alchemy recipes, and more creatures in the world. Also, Shopkeeper prices will fluctuate depending on their available stock.

Another update for Shroud of the Avatar will come on February 26th. In this update, the mainland will see another expansion. There will be new Sun and Moon Magic spells, and more combos will also be added. Crafting skills will start to come online, and the creature list will continue to expand. There will now be stealth mechanics, and clothing and armor will be dye-able for customization. Patrolling creatures will show up on the overworld map and can be engaged or snuck past depending on what the player wants to do. Players can display their title in the game, and will be able to teach each other emotes.

The third and final update for Shroud of the Avatar that is planned so far will release on March 26th. Starting in March, there will be Steam Achievements, and there will still be mainland expansion. There will continue to be more spells added, this time Chaos magic, and more combos added. Crafting will have events during the crafting process, allowing players to interact with the process and affect the outcome. More creatures will be added, as well as more armor and clothing. There will be a new cover system added, and players will be able to write in blank books and share them with other players.

Shroud of the Avatar is currently in its beta process. You can pledge towards the game here. The title will release sometime in 2015.

I’m Load The Game’s co-founder and community manager, and whenever I’m not answering questions on social media platforms, I spend my time digging up the latest news and rumors and writing them up. That’s not to say I’m all work and no fun, not at all. If my spare time allows it, I like to engage in some good old fashioned online carnage. If it’s an MMO with swords and lots of PvP, I’m most likely in it. Oh, and if you’re looking to pick a fight in Tekken or Mortal Kombat, I’ll be more than happy to assist! Connect with me by email markjudge (@) loadthegame.com only
@@MarkJudgeLTG
Previous New Nintendo Console in Development
Next Disgaea 5 Six-Minute Trailer Released

Shroud of the Avatar Puts Out Release 13