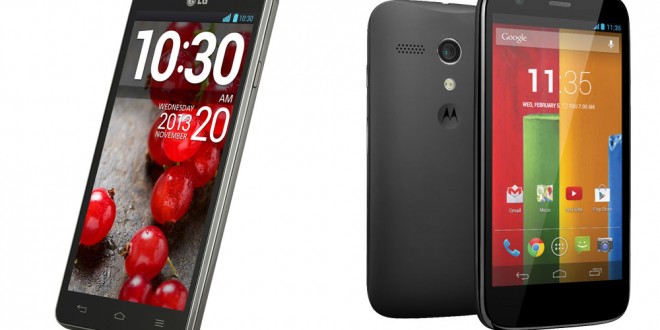 There are a million articles covering various flagship phones, their pros and cons, prices and specs, but most of these have one common issue – they’re expensive. Sure, if you want the latest and best, you’ll likely ponder between a Samsung Galaxy S5, a Sony Xperia Z3 or an iPhone 6, but what if you don’t need all those fancy features or simply can’t afford spending close to a grand on a phone? There are some great budget smartphones out there that will most likely suit your basic needs, and some of them stand out of the bunch. Today, we’ll be looking at two offerings, one from Motorola and one from LG, both running on Android, both being affordable and earning more than a quick glance. We’re comparing the older LG Optimus L9 2 with the more recent Motorola Moto E.

With older or cheaper phones, the question of software can often be problematic. The LG Optimus L9 2 (yes, it’s quite a mouthful), model number D605, was originally released with Android Jellybean 4.1.2. That’s quite outdated, but luckily, LG payed attention to its cheaper and older models too, and the L9 2 now comes with Android KitKat 4.4.2 out of the box. If you find yourself purchasing an older batch phone, you can still easily update from Jellybean to KitKat. While this isn’t the latest version of Android out there (sorry, no Lollipop officially), it’s still a relatively recent version of Android that works flawlessly.

Being a more recent model and running on a more raw version of Android, the Motorola Moto E comes with a later version. Let’s keep in mind that the Moto E was released almost a full year after the Optimus L9 2, so this is relatively unsurprising. Still, let’s give credit where it’s due – the Moto E comes with KitKat 4.4.2 out of the box, which is already upgradable to the latest version of KitKat, 4.4.4. Add to that the fact that Motorola will likely release Android 5.0 Lollipop for the Moto E, and software-wise, the Moto E is a winner.

When it comes to design, the LG Optimus L9 2 is a winner, at least in terms of visual appeal. Not to say that the Moto E is necessarily ugly, but it kinda sends the “I’m cheap, but I work” message, rather than the “Yes, I look this good for such a low amount” message the Optimus sends. Granted, both smartphones use a plastic case, but LG managed to give its budget candidate a very premium look, despite using cheaper materials. The LG Optimus L9 2 is prone to fingerprint markings though, but other than that, it really is a looker, with nice, smooth edges and a great screen to case size ratio. It’s even durable – I’ve personally dropped mine (unintentionally, I admit) from a considerable height, and the phone came out without any major bruises. The back cover came off after the impact, but the phone kept running, and apart from an unnoticeable dent on one of its sides, it’s in impeccable shape.

The Motorola Moto E is also fairly durable, and while it isn’t as visually appealing as its LG counterpart, still looks decent. It’s a bit chunky, but it’s curved back is extremely pleasant to the touch. You won’t impress anyone by holding it in your hands, but you won’t care – it just begs you to play with it and hold it.

As far as displays are concerned, both phones surprised us pleasantly. On paper, the LG Optimus L9 2 has the better display – it’s a 720×1280 pixel, 4.7 inch, 312 PPI IPS LCD screen, and it looks fantastic. Honestly, you would not expect such a good display in such a reasonably priced phone, period. Most competitors don’t even come close to 720p, and the 4.7 inch size is the perfect mix between portability and visual comfort. Motorola’s Moto E isn’t half-bad either – while it comes with a smaller, 4.3 inch, 540×960 pixel, 256 PPI screen, it still manages to impress. Think about it this way – Apple smartphone displays have never been about the numbers, yet have somehow always managed to impress. The same principle applies to the Moto E, which might sound unimpressive, but rest assured, the phone’s display looks brilliant. It’s bright, has the right colors and is protected by Corning Gorilla Glass 3, something that the Optimus L9 2 lacks.

Ok, so we’ve established that the phones are doing at least decently in terms of design, software and display. What about the hardware side of things? Well, the Motorola Moto E shines due to being relatively new, and benefiting from more affordable and easily available hardware. It has a dual-core 1.2 GHz Cortex A7 CPU, combined with an Adreno 302 GPU, 4 GB of internal storage and 1 GB of RAM. It can also handle microSD cards up to 32GB, which are badly needed – let’s face it, 4 GB of storage doesn’t amount to much for any user that requires a multitude of apps. Unfortunately, being a budget phone is something that becomes clear at this point: the Motorola Moto E runs well enough, but for more hardware-intensive apps, it’s not quite enough. That Cortex A7 CPU is still one the low-end side of things, and that’s something that can be easily felt at times. Don’t expect to play the best-looking games on this phone, and you shouldn’t have high hopes of multitasking with demanding apps.

Old-school gamer with a cheeky tongue that gets me in trouble. When I'm not playing games, I'm writing about them, preferably in the vicinity of a fridge! Oh, and if you're a Justin Bieber fan, I'm afraid we can't be friends!
Previous Sony Xperia Z3 is gettting Android Lollipop next month
Next Lenovo Vibe Band VB10 is an e-ink watch with a great price

The Motorola Moto E is next up to get the Android Lollipop update, and it ...