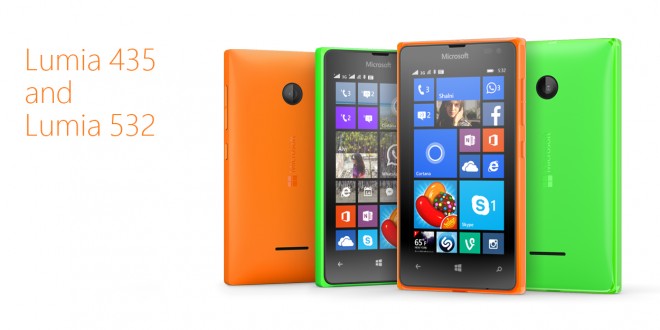 The Lumia 635 remains the cheapest, even among two new releases

The Lumia 635 has received a price cut as of late, offering the possibility of having the nifty little phone for as little as $70 unlocked. That’s certainly a low price to pay for a relatively powerful smartphone, but Microsoft decided they would put out even more affordable phones. First off, the price for the new phones will be higher than the cheap Lumia 635 price, but you gen considerably more when it comes to hardware. If you are curious, the two new handsets Microsoft launched are the Lumia 435 and Lumia 532.

The Lumia 635 price was always low, but its specs aren’t much to write home about either. Nonetheless, the phone does offer Windows 8.1 and the new Lumia Denim update, too. so it’s not a bad investment. Specs of the Lumia 635 include a 43.5 inch display with a 480*854 resolution adding up to 221 ppi pixel density. The whole device is powered by a Snapdragon 400 CPU backed by 512 MB RAM and 8 GB expandable internal storage. Naturally, you get a decent 5 MP camera on board, but you don’t have a selfie-shooter. The battery is pretty big, too, measuring 1830 mAh, which should keep up with your day pretty well. For the $70 price, that’s a pretty good setup on the Lumia 635.

Now for the novelties! The newly introduced Lumia 435 is the most affordable device of the two, costing about $85. Windows 8.1 and Lumia Denim are naturally onboard, not to mention decent specs that are definitely worth the money Microsoft is asking for the handset. You get a 4 inch display with a 480*800 resolution, running on a Snapdragon 200 CPU, backed by 1 GB RAM and 8 GB expandable internal storage. While that sounds actually worse than the Lumia 635, which is currently cheaper. You get an inferior 2 MP camera, too, not to mention a smaller 1560 mAh battery unit.

The more expensive counterpart of the Lumia 435 and Lumia 635 is the Lumia 532, which isn’t too different and costs about $95. This one comes with the same display and storage options, the differences lying in processor speed, seeing as the 532 comes with a quad core Snapdragon 200, while the 435 features a dual core version of the same chip. You get the same amount of internal storage expandable via microSD card, but you get a bigger 5 MP camera on the rear.

Having more RAM does help overpower the Lumia 635 and its cheap-o price, but otherwise the Lumia 435 and 532 don’t have much to show for themselves. That is unless we include the fact that you get free OneDrive storage up to 30 GB, Selfie app and Cortana. At the same time, having Windows 8.1 and Lumia Denim on such cheap devices is yet another plus. Another thing we should mention is that these Windows Phone units are intended for entry-level markets and will be pitted against the Samsung Z1 and the three Android One phones already available in India. Both new handsets will be available for purchase starting next month and they are turning out to be pretty good competitors to Sparkle, Carbon, Micromax and Samsung offerings in India and other emerging markets. Still, the Lumia 635 is the cheapest Windows Phone right now.

My life-long dream has been to test out every gadget on the market! Considering the fact that I've rapidly destroyed almost every gadget I've had so far, I'm not inclined to owning something, so my ideal outcome would be to have a different gadget each month. I'm really into smartphones, wearables and tablets and I love Playstation and Xbox, I'm sure I'll beat you at your own game (after a month of training... or two)
Previous iPhone 5s iOS 8 battery life
Next Halo 5 release date likely to be revealed at E3 2015