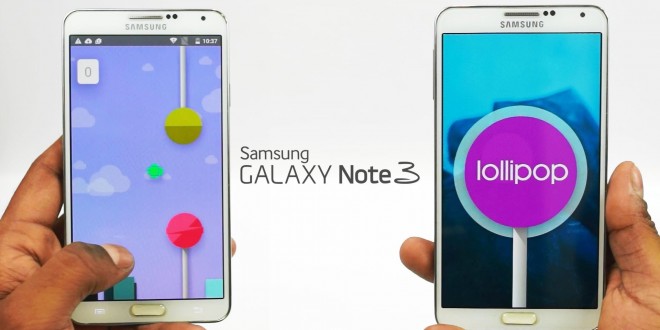 Indeed, the day has come when Galaxy Note 3 users can rejoice, because the official rollout of Android 5.0 Lollipop has begun today. Now, we’re not entirely sure if this is just a soak-test or a full-fledged rollout, but we suppose it’s the latter. People in various regions around the world are reporting that they can now access the Galaxy Note 3 Android Lollipop update through Kies from Samsung.

People in Russia should be most happy, since they are the first ones to be able to access the Lollipop treatment through Kies, version number N900XXUEBOA6. Those who can install the update should be surprised to see that TouchWiz did get a neat overhaul, making the settings menu as well as Samsung apps look more like Material Design than we would have expected.

If you are the owner of Galaxy Note 3, version number SM-N900, you can get hold of the leaked build and install on your device, courtesy of SamMobile. Since this doesn’t look too much like a soak-test, we are looking forward to seeing Android Lollipop rolling out to European and Asian countries, after which the U.S. should get the OTA. The timeline is based on how Samsung is handling the Galaxy S5 Android Lollipop rollout at the moment.

Even though the Galaxy Note 3 Android Lollipop update is now officially available and should spread across the globe in no time, we are a bit surprised that the Note 3 came ahead of the Galaxy Note 4, which hasn’t received any Android Lollipop as of yet. Still, we are glad to see that things are moving ahead and Lollipop is being sent out to more and more devices around the world.

Since you can now get the Galaxy Note 3 Android Lollipop update directly from the source, it is most likely that Samsung will speed up the global rollout of the software update to other devices, too. The U.S. Galaxy S5, as well as Galaxy Note 4 are still waiting for their update.

My life-long dream has been to test out every gadget on the market! Considering the fact that I've rapidly destroyed almost every gadget I've had so far, I'm not inclined to owning something, so my ideal outcome would be to have a different gadget each month. I'm really into smartphones, wearables and tablets and I love Playstation and Xbox, I'm sure I'll beat you at your own game (after a month of training... or two)
Previous The Witcher 3 to Have 16 Free DLC Packs
Next Xiaomi Mi4 officially launched for only $325 in India