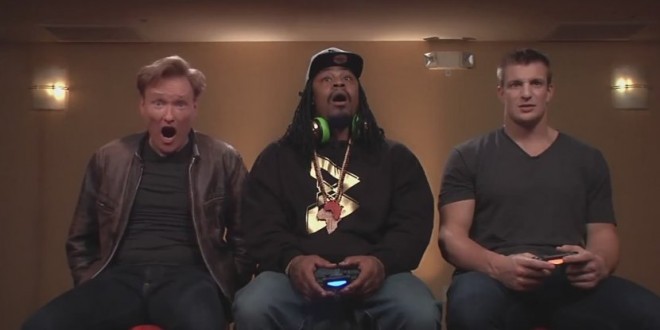 The Apr. 14 release date of Mortal Kombat X, NetherRealm Studios’ next entry in the long-running franchise draws ever closer, and the marketing gears have begun to turn. We’re only 30 days in, but I’m calling it, this episode of Conan’s Clueless Gamer, featuring Mortal Kombat X is already the best video of the year.

The setup is simple. With the Super Bowl looming, Conan figured it’d be a good idea to have a dress rehearsal. Patriots tight end Rob Gronkowski meets up with Seahawk’s running back Marshawn Lynch for a few pre-game rounds of Mortal Kombat X. The venue is the courtside Marriot, somewhere in Arizona. What happens next is comedy gold.

Now, Marshawn Lynch may be 200+ pounds of pure muscle, but the man simply cannot handle it when Kano quite literally eviscerates Ferra/Torr. He has to leave. Immediately. He’s also a button-masher, but don’t knock it till you’ve seen his um, unique technique in action.

The video’s littered with great exchanges, such as when Lynch reveals his favorite videogame.

Conan: Guys, what’s your videogame background?
Lynch: …Mario Kart.
Conan: What do you like about Mario Kart?
Lynch: Toad. And I like driving (does steering motions in midair).

Can’t argue with that. Lynch then proceeds to break down to Gronkowski the tactical nuances and importance of strategic kart-based combat. The best moment in the video comes 5:08 seconds in. The trio pretty much loses it as the full horror of Mortal Kombat X’s eye-wincing combat reveals itself. NetherRealm’s Ed Boon’s stated that Mortal Kombat X will feature more new characters than any other game the series history. The full roster of characters available is yet to be revealed. We do know series mainstays like Scorpion, Raiden, Kano and Sub-Zero will be present. We’ve also gotten a glimpse at newcomers like Cassie Cage, Kotal Kahn and D’Vorah, among others.

Mortal Kombat X, published by Warner Bros. Interactive Entertainment, is set for release on Apr. 14 on Windows PC, PlayStation 4 and Xbox One. PlayStation 3 and Xbox 360 ports are being handled by a different developer.

Hardcore gamer by day, comic book writer and professional heavy sleeper by night. I love videogames and I'll try almost any genre once. Unless it requires lots of time and effort, then I'll probably zone out. I started on the NES and cherish those early Nintendo memories, but I tend to call PlayStation platforms home now. Also, Star Trek TNG rules.
@@shobocoker
Previous LG L70 vs Moto G 2014: are cheap smartphones worthwhile?
Next Prison Architect – are you a merciful god?

Saying that the Mortal Kombat series has come a long way would be an understatement. From the ...