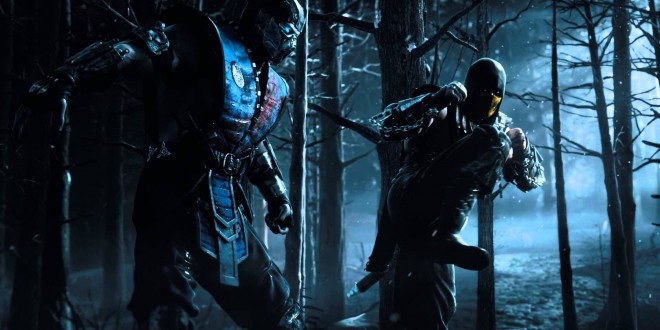 Saying that the Mortal Kombat series has come a long way would be an understatement. From the graphics to the mechanics, Mortal Kombat has evolved numerous times, constantly tweaking the formula in each iteration. With the addition of 8 brand new characters to the series and accessible – but deep – fighting mechanics, developer NetherRealm Studios is set out to prove that Mortal Kombat X is the true contender for those looking for an accessible, but deep fighting game.

Scorpion, Sub-Zero, and a few others make their return, but it’s the new fighters that are undoubtedly the most intriguing additions to the Mortal Kombat ‘Kast.’ Whether they’re descendants of the old or completely brand-new, each character brings something new to the Mortal Kombat franchise. Kung Jin has the ability to shoot elemental-enhanced arrows, Takeda can hit you from mid-screen with his wrist-whips, and D’Vorah – well, she can throw bugs at you. 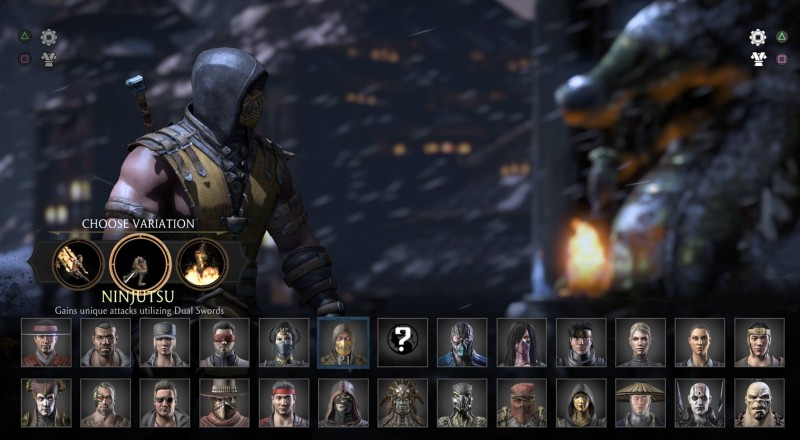 What makes Mortal Kombat X mechanically deeper is the introduction of ‘Variations.’ Each character on the roster has 3 different variations to choose from. Each variation alters the character with tweaks to their kit: Scorpion’s ‘Inferno’ variation gives him the ability to summon a minion that will attack for him, his ‘Ninjitsu’ variation gives him a pair of katanas, and his ‘Hellfire’ variation gives him a fireball and a couple of zoning area-of-effect attacks. Each of these variations also gives Scorpion a different visual cue, like fiery hands or a skull attached to his waistband. If your favorite character isn’t in this one, chances are you’ll find a character worth playing. In a technical sense, variations triple the amount of fighting game kits among the fighters.

Various mechanics like ‘X-Ray’ moves from the previous Mortal Kombat make their return. X-Ray moves are meter-depleting super moves where one character will inflict serious pain on another – all while the camera zooms in, detailing each bone-shattering, or testicle-smashing move in detail. A little gruesome, yes – but it’s the stuff like X-Ray moves that makes Mortal Kombat X so violently hilarious when Sub-Zero stabs you in the eye with your frozen entrails, and you’re still up by Round 2.

‘Fatalities’ are still here, and let me say that this is the first Mortal Kombat game where I wince watching Jax pop open his daughter’s skull. As a callback, Mortal Kombat X reintroduces the ‘Brutality’ finisher. In the older entries, players would have to mash in a long series of commands to watch their opponent burst into various body parts. MKX does away with that button-mashing for something more subtle. Brutalities now enhance special moves and are now performed when each character has fulfilled a certain criteria – killing them mid-combo. Much like ‘Killer Instinct,’ Brutalities can only be performed when the opponent has little health left. For instance, one of Kitana’s Brutalities utilizes her ‘Throat Slice’ special move. To initiate the Brutality, the player’s final hit has to be ‘Throat Slice’ while holding forward on their controller. Since combos can continue in the final round even when the opponent’s health is depleted, the new Brutality system makes ending combos that much more satisfying. 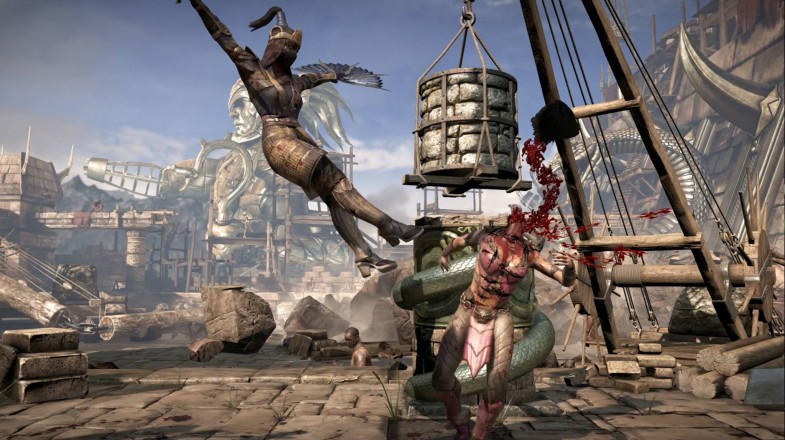 Presentation-wise, Mortal Kombat X nails it on the head, and removes the brain. The sound design is superb, most notably during the X-Ray and Fatality sequences. As soon as these moves are initiated, the backup tracks are silenced, and all you hear are bones crunching, blood gurgling, and screaming – lots of screaming. Mortal Kombat X probably has one of the most intricate character select screens in fighting game history. The Mortal Kombat X roster is fully animated, and highlighting each character will give you a glimpse of their personality and fighting style. Reptile slithers his tongue about as acid drips and Liu Kang’s fists will light on fire and then he’ll bow. What gives the characters the most personality are the character intros. The two characters take verbal shots at each other before the fight begins. Without giving away too much, mirror match intros tend to be the most entertaining.

Fighting games are usually meant for local play, but Mortal Kombat X has enough single player modes to keep you busy until you invite over your next victim. The Story mode for Mortal Kombat X will last around 4-5 hours, depending on how well you do during each fight. The cutscenes are well-directed and the voice acting doesn’t fall into the cheesy pitfalls of other fighting game story modes. Mortal Kombat X‘s story follows the events of 2011’s Mortal Kombat reboot. Shao Kahn is dead and the Outworld is under civil war to determine who the next ruler will be.

Apart from the wonderfully cinematic story mode, Mortal Kombat X has different sets of ‘Towers’ for you to challenge. There’s the standard 10-kombatant tower, a ‘Test Your Luck’ tower that throws in random modifiers, a ‘Test Your Might’ tower that challenges your speed and precision, an ‘Endless’ tower, and a ‘Survivor’ tower where health regeneration is limited. In addition to the ‘Traditional’ towers, there are ‘Living Towers’ which change over time. You can also challenge your friends by generating your own tower and competing to see who performs better. 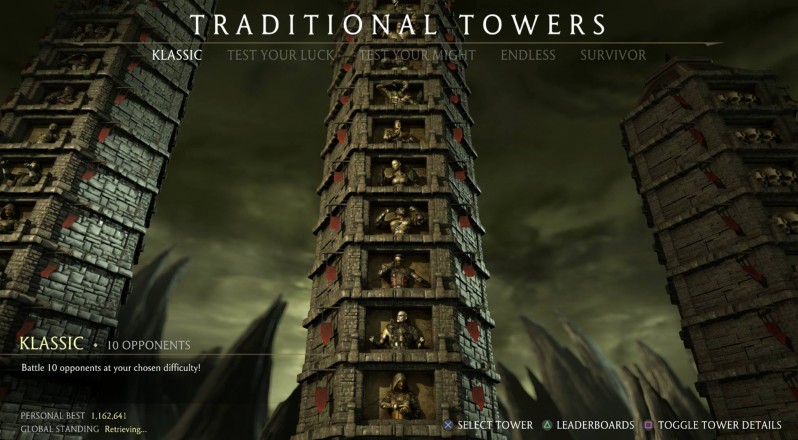 Mortal Kombat X improves upon the online suite that the previous game first introduced. You can join rooms and challenge individual players or try and reclaim your crown in the ‘King of the Hill’ mode. King of the Hill emulates the golden age of arcades by allowing a queue of players to spectate the current fight; winner stays, loser passes the stick. King of the Hill used to be a pain. When you’d lose, you’d have to wait quite a while before getting the chance to reclaim the throne. Now when you enter the queue, you have the option of jumping into ‘Practice’ mode. It’s a much-needed addition to the King of the Hill formula that will keep fighting fans engaged while they wait. A mild inconvenience is that if you join the room mid-match, then you’ll only be able to see life bars and energy meters. Still, King of the Hill mode is the best way to scope out other players’ tactics while testing your own.

The net code isn’t perfect. Fighting games rely on small windows of execution to nail the right hit-string or blocking proper mix-ups. Sometimes the connection between players can idle, which is really jarring if you’re in a really heated matchup. I’m really hoping NetherRealm Studios will improve upon the netcode in a later patch, but for now the online mode is a small distraction from the local modes.

In addition to the online modes, Mortal Kombat X introduces the ‘Faction War.’ You’ll pledge alliance between 5 different factions where each faction grants you special Fatalities unique to each individual group. By just playing Mortal Kombat X, you can earn points for your faction. During a ‘Faction War,’ special towers and bosses will be playable, helping you earn more faction points. At the end of each Faction War, players in the winning faction will earn bonuses.

I can see how this can get a little one-sided, because everyone and their mother joined the Lin Kuei. The Lin Kuei currently makes up about 40% of the PS4 population. I feel like if players were randomly sorted into different factions, then the even distribution would make the faction wars a lot more meaningful. Until then, it’s Lin Kuei or die I suppose.

Mortal Kombat X is filled with enough unlockables to keep you busy for months to come. Costumes, concept art, and the other -alities are among the few things you can find hidden in the ‘Krypt’. Every mode and fight you finish grants you ‘Koins’ that you can spend unlocking various items. The Krypt is essentially Mortal Kombat X’s jumpscare simulator. You’ll roam throughout the map, uncovering hidden passages that lead to more unlockable items. Completionists will enjoy the countless things to unlock, and it serves as a nice break from all the fisticuffs and Fatalities.

Truth is, if you’re nostalgic for the Mortal Kombat franchise, but not a fighting game player – then this may not be the game for you. What makes Mortal Kombat X so appealing are the seemingly impossible combos. You can’t go into Mortal Kombat X mashing buttons. There’s a unique flow to the game, and once you find your groove, hitting combos are going to be a blast. Fighting games have changed a lot since then, so to truly appreciate Mortal Kombat X I’d recommend spending some quality lab-time in ‘Practice’ mode.

While most fighting game fanatics will gawk at all the complexities within the game mechanics, newcomers should know that MKX is the most polished Mortal Kombat to date. It's flashy enough to play, but it takes a whole lot more to master. Though the online netcode isn’t quite up to par with most fighting games, MKX has enough modes to challenge even the most competent of ‘Kombatants.’

When he's not venturing Hyrule, he's probably out on the tennis courts. His Y-axis is always inverted.
@slimjimmy_
Previous Mortal Kombat’s first gay character… Can we get over it?
Next Ultimate Chicken Horse: Anger Your Friends