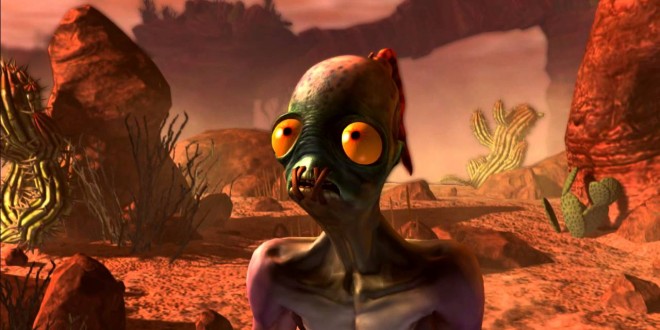 Get ready, Oddworld fans: Oddworld: New ‘n’ Tasty’s release date inches ever closer, and Steam decided to finally get the game up for preorder. Oddworld: New ‘n’ Tasty is the remake of the Playstation One platform puzzle classic Oddworld: Abe’s Oddysee, in which you lead an unlucky factory worker from becoming lunch to savior of his entire race. The game will be available for Windows, Mac, SteamOS and Linux platforms.

The PC version of Oddworld: New ‘n’ Tasty is set to get some extra perks to suit PC players, such as full Xbox 360 controller support, achievements, leaderboards, and steam cloud support. No word on whether there will be trading cards, though. Steam users can pre-purchase this game through February 25 for 10 percent off the original asking price, for a total of $17.99 USD. As an added bonus, those who preorder will be able to get both the Scrub Abe costume and Alf’s Escape DLC for free, not unlike those who preordered the PS4 version last year.

As far as specs go, they’re midgrade all around, but at the very least, windows users are going to need: 10 GB space, 4 GB RAM, a Radeon 5700 Video Card, and Intel i3-330. Linux users will need Ubuntu 14.04 (or any similar OS), with the recommended bare minimum of an AMD Athlon X4 750K CPU. Mac users should have a Mountain Lion OS and an i3 processor at the very bare minimum. Though it’s nice that the PC version’s getting some spotlight, there’s still no word on a release date or even a status update on the Wii U and Playstation Vita versions. Perhaps they’re still having the memory and performance issues that we were told about last time. Either way, it seems to be a long way off until we get any real updates.

Oddworld: New ‘n’ Tasty is already available for PS4, and will be available for Steam users on February 25. The Xbox One and Playstation 3 versions are set to release in March 2015.