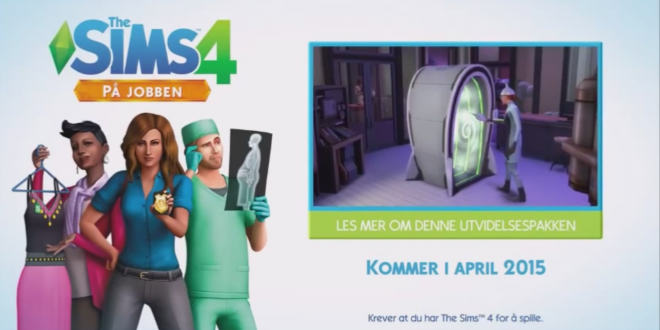 The Sims 4 was released in September 2014, and, aside from a few bits of DLC, there has been not even a whisper about the planned expansion packs. Now, reports seem to indicate that a new trailer for the first expansion pack for this title was recently released in error on the official Norwegian Sims YouTube channel. The video has since been made private, however our colleagues at Twinfinite were able to take screenshots of the video.

“The Sims 4 Get to Work: official announcement trailer. Take your Sims on the job. Save lives. Solve Crime. Invent things. Start your own company. Get to Work Expansion Pack.” – translation of the video’s text, courtesy of Twinfinite

This expansion pack seems to include a variety of professions that players’ Sims will be able to take on. These include careers in medicine, law enforcement, scientific pursuits and entrepreneurs. Careers in medicine and law enforcement could be an indication that this expansion pack will introduce illness and crime into the game. However these potential new features have not been confirmed at this point. The career as an entrepreneur offers players the opportunity to be an active participant in a new business. Sims are able to open up a variety of shops, including clothing, toy, electronics stores and a bakery. Players won’t just be passively sitting around and waiting for their Sims to come home. Running a shop is an interactive experience.

The Sims 4 is the latest entry in the Sims life simulation series. Players are able to create a Sim and explore a variety of personalities. This title allows players to control their Sims in a variety of activities and relationships. One of the biggest changes from past games is the addition of emotional states. They can have a significant effect on the user interface, social inactions and personality. The first Sims 4 expansion pack may be arriving on store shelves on April 1st.

Tags expansion packs Get to Work PC The Sims 4

I'm a gamer and a massive fan of anime. I'm a massive simulator geek. Who isn't? Simulators offer me the opportunity to experience something I wouldn't otherwise. Have you ever driven a train? I haven't, and I probably never will. However Train Simulator 2015 gives me the opportunity to experience what it might be like. I'm also a big train and space exploration geek.
@ivanmashkov
Previous Android 5.1 Lollipop rolling out in Indonesia, fixes memory leak, silent mode
Next Apple Maps to get a Street View feature soon?