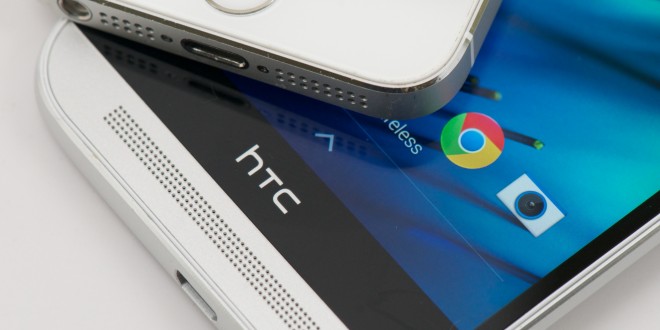 The HTC One M7 as well as the iPhone 5S are flagships of yesteryear, which means that you can get pretty good deals on both of them, especially if you choose refurbished or used units. The HTC One M7 is regarded as one of the best smartphones on the market, even though it is an older model. Users have complained about overheating issues with the device, but otherwise the handset is very appreciated for its aluminum build, great display and great performance. The iPhone 5S is also an older flagship you might find on offer at various retailers nowadays, being the predecessor of the iPhone 6 and the iPhone 6 Plus. The iPhone 5S is a premium phone marketed at Apple fans as well as those who prefer a metal design over a plastic design. At the same time, the iPhone 5S comes as an upgraded smartphone compared to predecessors and benefits from the most recent software updates.

The HTC One M7 is starting to receive Android 5.0 Lollipop in the U.S., so the hype around the device is a bit higher today, which is why we chose to compare the device with the iPhone 5S. The latter Apple flagship is in the news mostly because of the issues iOS 8 is causing on the phone, which will supposedly be fixed by the release of iOS 8.2 in March or April. Now software-wise, these flagship are among the most up to date older phones, which means that you can still get high-end performance for a more affordable price, as they are more than one year since their original release dates. Since both these phones emphasize metal design and good quality build materials, we though they would make for a good comparison to let you know which smartphone is best.

The HTC One M7 comes with a 4.7 inch Super LCD3 with a 1080*1920 resolution which adds up to around 469 ppi. The display on the device is pretty good, similar to the one on the HTC One M8 and it comes with great viewing angles and decent outdoor visibility. Some users have reported that when the phone overheats, a yellow spot appears on the display. The issue seems to be uncommon, but you should still know about in case you are thinking of buying a used HTC One M7.

Design-wise, the HTC One M7 comes with an aluminum chassis, front facing BoomSound speakers and pretty thick bezels. Still, the phone is pretty lightweight and easy to use. It’s not as rounded as its successor, the One M8, which is a plus or a minus, depending on your preference. The sturdy build allows for a lot of durability and the aluminum chassis feels great in the hand. Overall, aside from the pretty thick bezels, the HTC One M7 design is pretty neat. 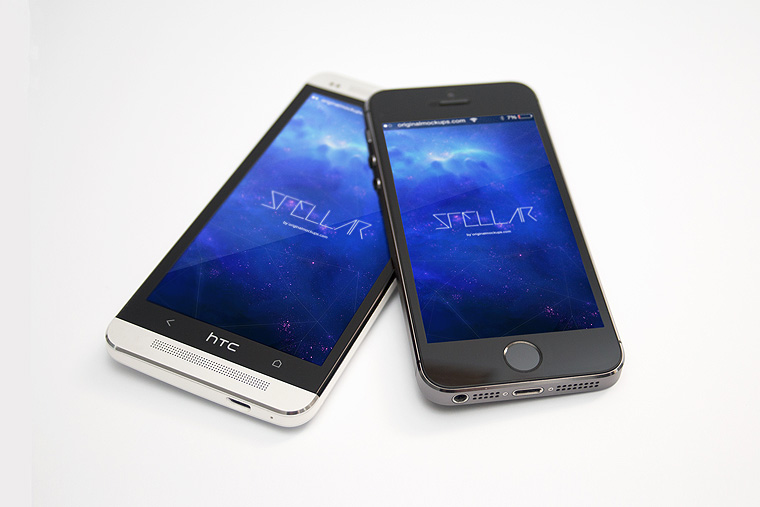 Now on to the contender from Apple, the iPhone 5S. This phone comes with a smaller 4 inch LED-backlit IPS LCD display with a 640*1136 resolution that adds up to a decent 326 ppi pixel density. iPhones are known to have high-end displays, and that stands when talking about the iPhone 5S, too. Even though the display is rather small compared to more recent smartphone releases, including the HTC One M7, it is incredibly immersive and high-res, not to mention great outdoor visibility and decent viewing angles. Even though the resolution and pixel density on the phone are lower than on the HTC One M7, you can barely tell the difference. Now it depends on whether you want the larger or smaller display, because when it comes to overall quality, the two phones are pretty much at a tie, if you don’t count the possibility of the yellow spot.

The design of the iPhone 5S is similar to that of the HTC One M7, as in it comes with a similar sturdy aluminum unibody chassis that feels neat in the hand. It’s a bit lighter, a good deal smaller and thinner than its current competitor, which makes it a pretty neat compact phone if you’re into that sort of thing. Otherwise, the bezels on the device are rather large compared to recent standards, so that might be a let-down for some. Nonetheless, aside from the proprietary Lightning charging cable, the design is appealing, so it’s up to you to decide which sits better with you.

Both these flagships are older models, so don’t expect to have staggeringly high specs on either of them. Even so, they manage to outperform even current generation flagships in certain benchmark tests. That being said, you shouldn’t judge performance by specs only, rather by real life tests. The HTC One M7 does seem a bit sluggish compared to the HTC One M8 and LG G3, but it definitely holds up well no matter what you throw at it. It comes with a Snapdragon 600 CPU, backed by 2 GB RAM and either 32 or 64 GB internal storage, with no microSD card slot. You get Android 5.0 Lollipop with Sense 6 on top in most regions now, which is neat as Sense 6.0 is one of the best user interfaces out there at the moment. The outdated processor does handle strain pretty well, but the HTC One M7 does overheat a lot. The aluminum chassis contributes to that, though, because it doesn’t dissipate the heat as well as other phones. That has been improved with the One M8, noticeably. Now the performance is pretty ok on the HTC One M7, although it won’t blow your mind.

The camera setup isn’t too much to look at though, and that’s the biggest downside of the HTC One M7. The handset comes with a 4 MP Ultrapixel camera on the rear with optical image stabilization, autofocus and an LED flash. You can get decent photos out of it, as well as high quality videos, but the 4 MP Ultrapixel sensor still struggles with focusing, low-light conditions and stable shots, despite the optical image stabilization. It does overexpose occasionally, so the HTC One M7 is definitely not the best pick if you want a good camera. Still, it’s decent and will do if you’re not a smartphone photography enthusiast and only the occasional snapper for random pictures. The front camera is an average 2.1 MP shooter with a wide-angle lens, which is nothing to write home about. 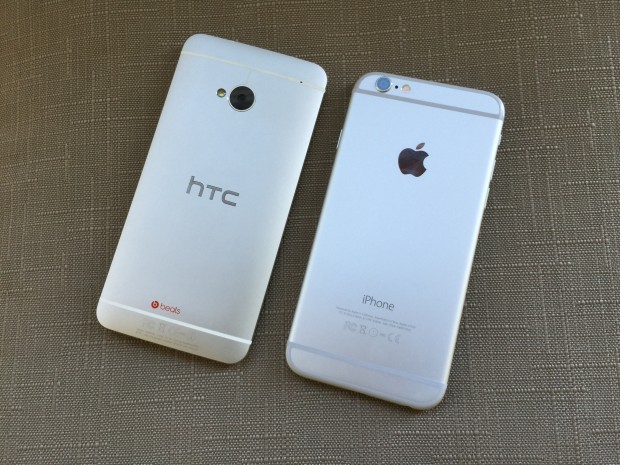 The iPhone 5S has suffered a lot since iOS 8 was released, as it affected performance and usability a lot. Users of the phone are hoping that the next update, namely iOS 8.2 will fix these issues. Users have experienced battery drain, apps crashing, a less than smooth UI and an overall disappointing performance since installing the update. That doesn’t mean that the iPhone 5S can’t handle stuff, though. It comes with an Apple A7 64 bit chipset, backed by 1 GB RAM DDR3 and either 16, 32 or 64 GB internal storage, with no microSD card slot. The iPhone 5S will definitely handle most things you throw at it, and once the software is updated and mended, it should work just as good.

The camera on Apple device is usually high-end and above average, and the iPhone 5S is no exception. The 8 MP iSight camera on the rear of the iPhone 5S takes great pictures compared to other devices of last year and is a bit better than the HTC One M7 camera in certain conditions. With the iPhone 5S you won’t have an above average photography experience, but you will have a pretty decent one. Even the 1.2 MP FaceTime front camera is pretty neat, although the HTC One M7 front camera takes slightly better video and has HDR, too. Still, the HTC One M7 manages to take better photos, even if not perfect ones.

Since both the HTC One M7 and the iPhone 5S are last year’s flagships, they have passed their one-year presence on the market, which means that if you are willing to buy used, you’ll get them for even less than half their original launching price. Buying used technology doesn’t sit well with everyone, but if you do accurate research and documentation, you can get mint condition phones for a good price. Since we’re not in the used technology business yet, we’re going to give you approximate prices for new, unlocked devices, so that you can get your bearings. Most of our prices are taken from major online retailers like Amazon and Best Buy, if you’re wondering.

You can get the HTC One M7 unlocked for around $200, but you’ll have to scrape up $100 more if you want LTE. The iPhone 5S is much more expensive, though, the base model setting you back about $500 unlocked. Based on that, and considering specs, camera, display, design and display size, the HTC One M7 is the clear winner here, as it is a smaller investment for largely the same value.

My life-long dream has been to test out every gadget on the market! Considering the fact that I've rapidly destroyed almost every gadget I've had so far, I'm not inclined to owning something, so my ideal outcome would be to have a different gadget each month. I'm really into smartphones, wearables and tablets and I love Playstation and Xbox, I'm sure I'll beat you at your own game (after a month of training... or two)
Previous New World Of Warships Trailer Revealed
Next Assassin’s Creed Rogue on PC Finally Dated