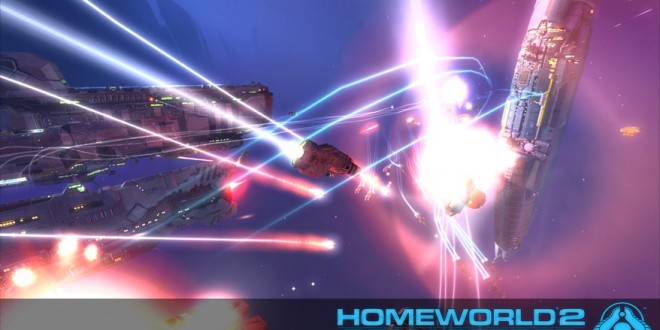 Homeworld is one of the classics of the real-time strategy genre, so it was expected that many were excited by the recent announcement of the remastered edition by Gearbox Software at PAX South. Today, the development team released the first story trailer for Homeworld Remastered that provided a refresher of the basic premise of the two games and additionally highlighting the improvements that have been made to the visuals and audio of the original 1999 game for the new, modern HD version. The trailer builds on the information revealed and comparisons detailed in the first developer diary  that was posted a few days ago.

The original creators from Relic Entertainment cooperated with Gearbox Software and were heavily involved in the development process of Homeworld Remastered. The latest trailer of the new version of the space strategy game shows off its updated textures and resolutions. The original audio and video designers have recreated the cinematic scenes- the trailer shows a seamless transition from the original visuals to the new and improved version in order to highlight both the familiarity and the differences of Homeland Remastered.

The new story trailer for Homeworld Remastered reminds players of the basic set-up behind the game as well. The Guide Stone was discovered through satellite detection on the human-populated planet of Kharak. Upon discovering the stone, carved with a galactic map and an inscription that translated to ‘our home’, humanity began to realize that they had come from somewhere else in the universe. The player is cast as a ship commander who must strategically control his fleet in order to fulfill the mission of returning to this mysterious home.

Emma is an aspiring something-or-other with a love for video games fostered since childhood. She is more prone to rage-quits than she would like to admit. In her spare time, she runs her own blog and writes creatively.
@back_Paq_ing
Previous Samsung Galaxy J1 flops with high price and low specs
Next Insomniac Announces Plans for Ratchet and Clank on PS4