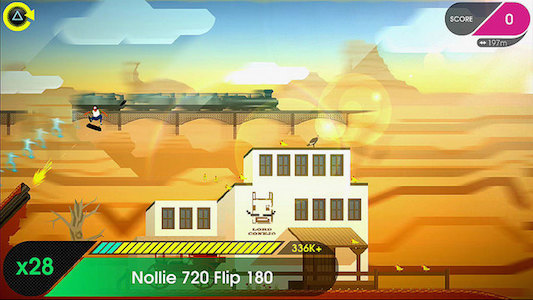 Courtesy of the PlayStation Blog.

Roll7, the developer behind one of the best indie titles in 2014, has revealed a trailer for the game’s sequel. OlliOlli 2 will feature many of the same mechanics as the original game in the series, however Roll7 will be refining many of those mechanics in this title. The biggest change is the shift away from pixelart, however fans of the original OlliOlli may be more excited for the addition of manuals and combos. This will allow players to show off their skills by chaining combos like pros. The introduction of combos has increase the potential score, so the developer has introduced a new section to the Heads Up Display (HUD). It will indicate the potential score that players will be able to get by landing the current combo on Perfect.

Those won’t be the only new features. OlliOlli 2 will include grind switches and epic tricks. Grind switches will allow skillful players to switch between two types of grinds. Epic tricks take longer to perform than normal ones. Players will have to fight for more air-time in order to pull them off. That air-time can be had by perfectly launching off curved ground, ramps and rails. OlliOlli 2 will also feature split routes that will only be accessible by performing those “perfect launches.” This sequel will also feature local multiplayer where four players will be able to go all out to become the winner. No release date for OlliOlli 2 has been announced, however it will be arriving on the PlayStation 4 and PS Vita consoles in 2015.

The original OlliOlli was released in 2014 on most mainstream video game consoles. This simple 2D title allows players to perform some great tricks with one of the simplest control schemes. This title gives players only a single life to live and over 120 tricks and grinds to perform. OlliOlli will challenge players to perform even better with the RAD Mode and Daily Grind. RAD Mode will be the ultimate test of players’ abilities, while the Daily Grind will ask them to challenge the whole world. OlliOlli is out now on the PlayStation consoles, Xbox One, Wii U, 3DS and PCs.

I'm a gamer and a massive fan of anime. I'm a massive simulator geek. Who isn't? Simulators offer me the opportunity to experience something I wouldn't otherwise. Have you ever driven a train? I haven't, and I probably never will. However Train Simulator 2015 gives me the opportunity to experience what it might be like. I'm also a big train and space exploration geek.
@ivanmashkov
Previous Insomniac Announces Plans for Ratchet and Clank on PS4
Next Abandoned Multiplayer Games May Be Revived Due To EFF DMCA Exemption