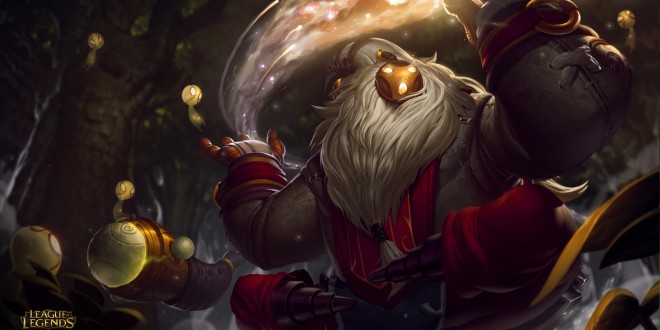 Bard, The Wandering Caretaker is the latest addition to League of Legend’s roster

Rumors about Riot introducing a new playable character turned into reality when the company revealed their newest champion, Bard, earlier today. A wandering spirit roaming the lands of Runeterra, this champion is designed to be played in a support role but also to be a highly mobile member of the team. Bard’s unique abilities allow him to support his teammates while he takes advantage of his high mobility by quickly switching lanes, pushing while his marksman has retreated or covering ground as he collect Ancient Chimes, an item which appears on the ground next to Bard as a result of his passive skill and that, once collected, grants him a small boost to mana, exp and speed.

Bard is not only a support, though. His passive will also spawn meeps, small spirits that will deal additional damage every time he attacks an enemy. Bard’s Q skill, called Cosmic Binding, allows the character to discharge some cosmic force in a line. As it hits its first target, the burst of energy continues through, searching for secondary targets. If the spell hits a wall, the first target it went through will be stunned for a brief period of time. If a second target is hit, both targets will be stunned.

Bard’s remaining skills allow him to play an important role as a support for his team and further increase his mobility. Caretaker’s Shrine, the W skill, allows Bard to summon a small health package that allies can walk on in order to recover some of their health and a boost of speed. Magical Jurney, the last of this character’s general skills allows the creation of a portal on a targeted wall, creating a tunnel to the far end of the wall. The tunnel is usable by both friends and foes. Finally, Bard’s Ultimate Skill, known as Tempered Fate places all targets in the area, friends, foes and minions, in a stasis, making them invulnerable to damage until the effect wears off. Bard will be introduced with the next patch. More information about this character, including a bit of lore and the list of champions he works well with and against can be found on League of Legend’s website.

Alessandro is a languages and literature student and gaming enthusiast. Long hair and a bushy beard, he spends most of his time on romantic dates with fascinating old tomes. In his free time, he follows and comments the gaming community while playing games. You can follow him on twitter to see what he's up to.
Previous Street Fighter V Will Have Online Beta, Return of Nash
Next Tera: Fate of Arun 30.09 patch introduces Guild Fortresses and other new core-gameplay features