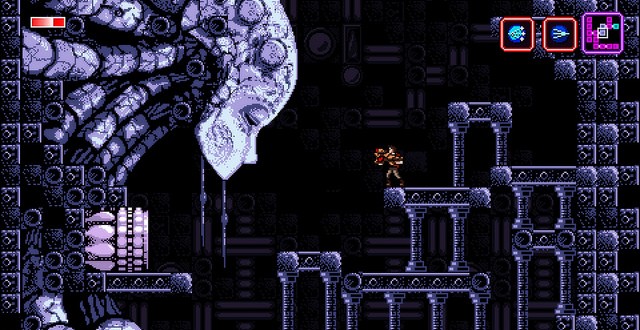 Tom Happ, the developer behind the indie platforming title Axiom Verge, has revealed the release date for the upcoming game in a recent PlayStation Blog post. This game will challenge players to survive a horrible lab accident as one of the scientists. The game’s protagonist, Trace, is transported to an ancient and high-tech world after a fatal accident in the lab. This 2D platformer will allow players to explore “9 labyrinthine, interlocking areas.” Axiom Verge will feature over 60 power-ups and items. It was inspired by games like Metroid and Rygar and includes “glitches” that will allow players to break the game in fun ways.

Axiom Verge will focus on powerups that will allow players to explore previously unavailable areas and discover new puzzles. Happ revealed a few of the power-ups that will change the gameplay in new and interesting ways. The first one is the Nova weapon. Players will be able to detonate the shot in mid-air in order to take out enemies outside of one’s line of sight. The next one is the drill that will become available after defeating the first boss. It allows players to drill through a variety of materials to find new health upgrade and weapons. The most exciting power-up in the game is the address disruptor. This device allows players to create glitches to discover previously inaccessible areas and deal with difficult enemies. This “glitch ray” is designed to corrupt the reality around the player and created a lot of new puzzle ideas to explore.

Axiom Verge will be arriving on the PlayStation 4 console in a month, however it is ready for release right now. The extra month will allow journalists and media outlets the opportunity to prepare their reviews of the game. The game’s developer has confirmed that the PS Vita version is still in development with no announced release date. Tom Happ has also confirmed that the game will support cross-buy, so fans of the game won’t have to buy the PS Vita version separately. Axiom Verge will be arriving on the PlayStation 4 on March 31st and will cost $19.99.

I'm a gamer and a massive fan of anime. I'm a massive simulator geek. Who isn't? Simulators offer me the opportunity to experience something I wouldn't otherwise. Have you ever driven a train? I haven't, and I probably never will. However Train Simulator 2015 gives me the opportunity to experience what it might be like. I'm also a big train and space exploration geek.
@ivanmashkov
Previous New Vanguard Human Class Introduced to Nosgoth
Next Great Firewall of China: thousands of accounts deleted before policy is enacted