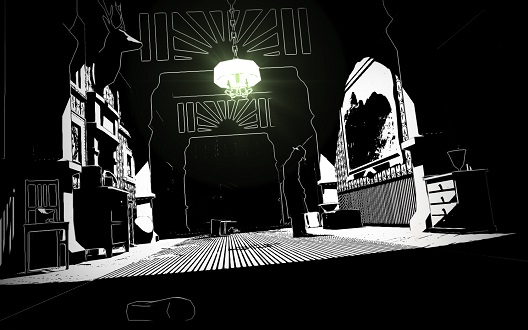 White Night, the first game by OSome Studio, will be arriving on the PlayStation 4 console tomorrow. As a result the developer has released a unique music video and launch trailer for the game. The live action music video showcases the game’s somber style, creepy mansion and offers a glimpse at the game’s hidden terrors. OSome Studio is attempting to revisit some classic themes from the original Alone in the Dark in this title, namely “mature storytelling, strong characters, compelling environments and equal respect for tension and terror.”

“Part of our team comes from theatre and film backgrounds, so we got to be involved in every step of the production process, which is quite a feat for a studio of our size. The costume tests and shooting introduced us to a brand new universe, and that’s exactly what we wanted to achieve with OSome: mixing genres and industries in order for everybody to benefit from each other’s unique experiences. The trailer and the game were produced at the same time, and we worked closely with our costume designers, make-up artists, cinematographers, cameramen, actors and more on the consistency of both worlds.” – an excerpt from the PlayStation Blog post

White Night is a stylish noir game that is set in 1930’s Boston. There is only one rule in this old-school survival horror title – beware the dark. It is late at night and the unnamed protagonist is heading home. He gets into a car accident and needs a place to stay. He finds an abandoned mansion where every source of light is precious. The light reveals more of the mansion’s secrets and keeps the hidden terrors at bay. White Night will be available for sale on March 4th for £13.99/€14.99.

The survival horror subgenre has been transforming over the past few years with a variety of games combining horror with the more action elements. White Night is an exception in this genre, however it is by no means alone. Several indie games, like Slender: The Eight Pages, have been able to create a horrific setting without resorting to excessive violence or gore.

I'm a gamer and a massive fan of anime. I'm a massive simulator geek. Who isn't? Simulators offer me the opportunity to experience something I wouldn't otherwise. Have you ever driven a train? I haven't, and I probably never will. However Train Simulator 2015 gives me the opportunity to experience what it might be like. I'm also a big train and space exploration geek.
@ivanmashkov
Previous Cyanogen shines on the Alcatel OneTouch Hero 2+, with a stylus
Next YotaPhone 2, the novelty-phone, coming to the U.S.