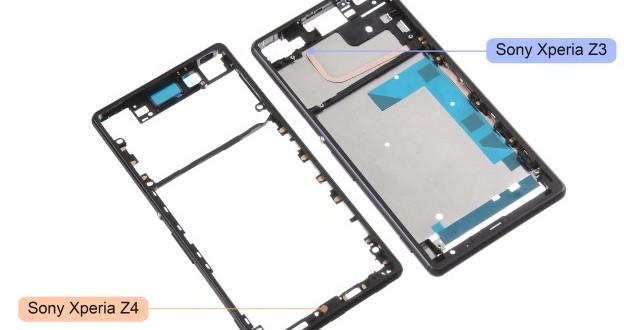 Will the Xperia Z4 be waterproof?

The Sony Xperia Z4 failed to make an appearance at the MWC 2015, instead the Japanese company introduced the new Xperia M4 Aqua, a waterproof entry-level/mid-range smartphone. Even though Sony CEO Kazuo Hirai has hinted at the fact that the smartphone division of the company would be either sold off or merged, the Xperia Z4 is still apparently in the works. A new image leak of the flagship shows off the metal chassis and frame of the device, with suggestions that the next flagship smartphone will not be waterproof, but it will be something different that we haven’t seen from Sony so far.

The Xperia Z4 was originally leaked in a set of business emails discussing product placement in the James Bond Spectre movie, and the leak suggested that the release date for the device would be between May and November 2015. Even though many had hoped that the Xperia Z4 would show up, at least in a prototype version, at the MWC 2015 show this week, Sony focused on other offerings like the M4 Aqua at the show. The company is also hard at work on Project Morpheus which received a release window within the first 6 months of 2016, and the company also showed off the Xperia Z4 tablet at the conference. 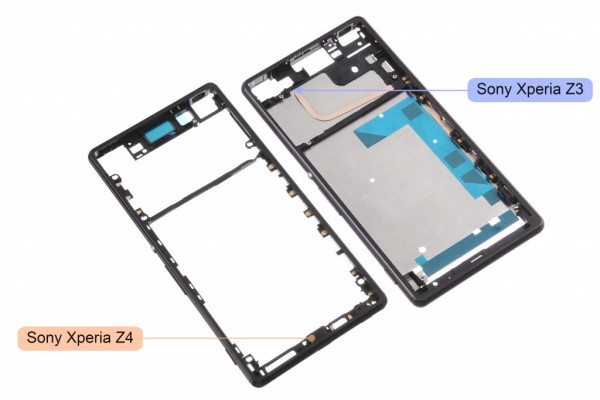 A new leak picked up by Future Supplier, a tech blog, compares the Xperia Z3 frame with the Xperia Z4 chassis, showing off minor differences in the layout and design of the new flagship. One thing very noticeable about the leaked Xperia Z4 images is that the next phone will most likely be thinner than any other Sony Xperia smartphone on the market, possibly even thinner than the iPhone 6, which was launched in September 2015. Besides the obvious thinness, the Xperia Z4 will be similar to its predecessor, as the images posted on the blog show that height and width are largely the same. The Xperia S4 then will most likely have the same size display, or something very close to the Xperia Z3 LCD display, but framed by thinner bezels and a thin body.

Another thing that is noticeable in the leaked Xperia Z4 frame is the absence of the microSD card slot and SIM tray from the right side of the phone. That suggests that the phone will inevitably dump the microSD card slot and move the SIM card slot to the front, while the charging port is moved to the bottom of the phone. Future Supplier noticed that there wasn’t any flap covering the microUSB port, and they think that this might point towards the fact that Sony might dump IP certification for the next flagship. 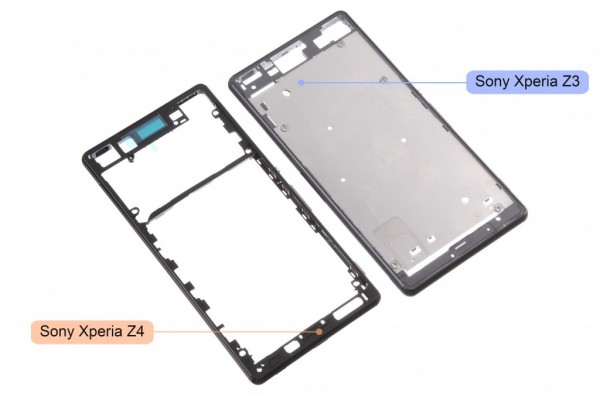 While that might be a real possibility, the Xperia Z4 could still get IP certification if we listen to rumors spread at the beginning of the year about a new technology being used in the design of the phone. According to these rumors, the Xperia Z4 will have the same waterproof certification, but without having to integrate the annoying flaps to cover the ports on the chassis. That might be an explanation for the absence of the flaps from the leaked chassis images, but take it with a grain of salt for now.

Many were disappointed by the fact that Samsung launched the Galaxy S6 and Galaxy S6 Edge without waterproof certification, without a microSD card slot and without a removable battery. That feeling of disappointment might be repeated with the Xperia Z4 once it is launched, if waterproofing and the microSD card slot will be missing from the phone. In spite of the backlash, there are many people who actually prefer the new design of the Galaxy S6, advocating that microSD storage is not safe, nor stable and waterproofing isn’t a necessary trait in a flagship phone. In their opinion, water resistance is enough, while waterproof certification should be implemented only in niche-smartphones designed for that purpose. Would you rather get a waterproof flagship or do these things matter less to you when buying a smartphone? 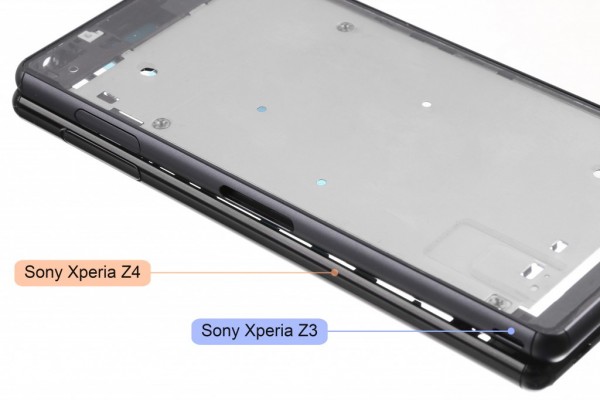 In any case, the Xperia Z4 chassis doesn’t reveal too much, but it does give fans an idea of how the phone will look like in the end and reinforces the belief that Sony will indeed release the flagship sometime this year. Rumors about Xperia Z4 specs so far include Qualcomm’s Snapdragon 810 CPU coupled with 4 GB RAM and at least 64 GB internal storage. A 20 MP camera is the minimum expectation for the flagship, but some say the sensor on the rear of the phone will be bumped up to 40 MP, although that seems unlikely. What would make you buy the Xperia Z4 once it is released? 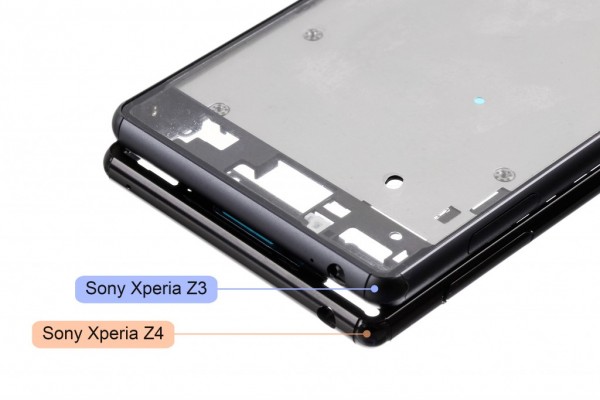 My life-long dream has been to test out every gadget on the market! Considering the fact that I've rapidly destroyed almost every gadget I've had so far, I'm not inclined to owning something, so my ideal outcome would be to have a different gadget each month. I'm really into smartphones, wearables and tablets and I love Playstation and Xbox, I'm sure I'll beat you at your own game (after a month of training... or two)
Previous Microsoft Lumia 640 pre-order goes live in the UK
Next HTC One M9 Mini rumored to be released soon