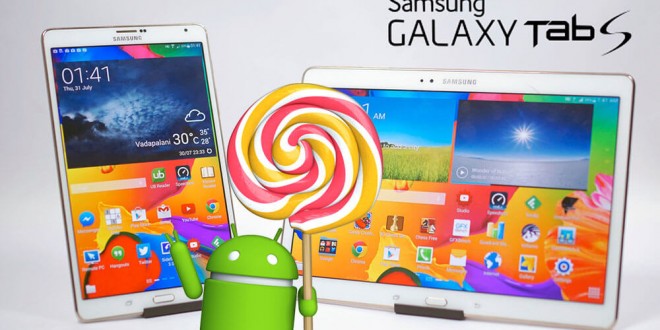 The Samsung Galaxy Tab S 10.5 is reportedly getting the Android 5.0.2 Lollipop update as we speak, although the rollout seems to be restricted to Canada and France at the moment. The Galaxy Tab S 10.55 is one of the biggest and most popular tablets from the South Korean company, and users have been waiting for the new update for a long time now. Although Android 5.1 would have been better received, Android 5.0.2 also brings forth a few bug fixes and features to the slate.

Android 5.0.2 Lollipop has been spotted as an OTA update on Canadian and French Galaxy Tab S 10.5 units, but reports from other countries in Europe are also appearing on forums. A few users in Romania and Poland have also reported getting an update this morning, It’s a well-received development nonetheless, because tablets outside of Google’s Nexus line-up seem to be the last ones to receive updates, especially when it comes to Samsung.

Even tough many expected the Galaxy Tab S 10.5 to get the Android 5.0.2 Lollipop update in February, it seems the South Korean company wasn’t actually ready in time with the OTA. Samsung has to add its own tweaks to Google’s software, as it needs to correlate TouchWiz with Lollipop and still manage to keep devices as bug-free as possible. The Lollipop rollout to phones and tablets around the world has been slow and buggy, but Google promised that subsequent updates will fix the issues everybody is complaining about. The most recent update, Android 5.1 fixes a couple of thousands of minor bugs found in the OS, while Android 5.1.1 will fix the most problematic one, the memory leak bug.

The Galaxy Tab S 10.5 around the world should start receiving the Android 5.0.2 Lollipop update this week, so keep an eye out for that notification, wherever you are. Our hunch is that owners in the U.S. won’t see the update soon, but we can always hope for a fast rollout. Also, if you own the LTE version of the Galaxy Tab S 10.5 or the 8.4 inch version, you’re not getting any special Lollipop-related notifications right now. Don’t despair, it’s going to creep in on your anytime!

My life-long dream has been to test out every gadget on the market! Considering the fact that I've rapidly destroyed almost every gadget I've had so far, I'm not inclined to owning something, so my ideal outcome would be to have a different gadget each month. I'm really into smartphones, wearables and tablets and I love Playstation and Xbox, I'm sure I'll beat you at your own game (after a month of training... or two)
Previous Oppo working on bezeless smartphone
Next Sony finally rolling out Android 5.0 to its entire Xperia Z series