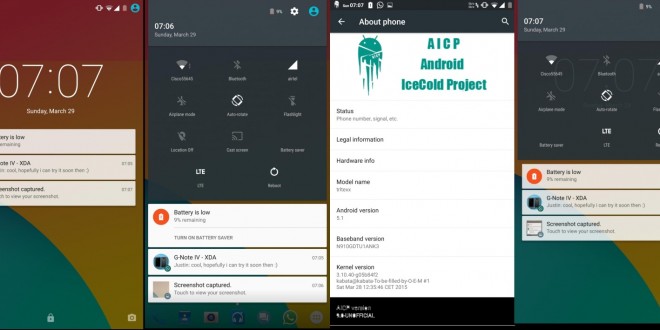 Get the Galaxy Note 4 Android 5.1 Lollipop feel with a ROM

Those of you are impatient for the Galaxy Note 4 Android 5.1 Lollipop update to rollout now have a solution, albeit an unofficial one. Seeing as Google have already release Android 5.1 Lollipop to Nexus devices, Samsung will definitely need a couple of months to release the update to its own devices, including the Galaxy Note 4. As we all know, smartphone enthusiasts have an impatient way of looking at updates, which is why we’ve scoured the internets in order to find you a worthwhile alternative that you may (or may not) try.

It’s no substitute for the real Galaxy Note 4 Android 5.1 Lollipop update, as it’s still an unofficial build which does have its bugs, but you can’t deny that it’s a tempting opportunity. A diligent XDA Forum member, as usual, named aukhan has uploaded the unofficial ROM called AICP from Team Emotroid and you can download it here. Be sure to read all of the forum members’ instructions and commentary, so that you are prepared for what awaits.

From what we gather, this Galaxy Note 4 Android 5.1 Lollipop-based ROM does not need you to root your phone, as you can flash it without. That’s good news, because if you botch things up, you can flash the firmware from Samsung or Kies and your warranty will still be intact. The Emotroid ROM is based on the AOSP for Lollipop and brings forth a couple of its own features which are outside of the offerings of Android 5.1 Lollipop. Note that the custom ROM has a few bugs, including: S Pen apps do not work, no Xposed support and a couple more. Be sure to read through all of the developers’ notes and begin with a full battery. Although rooting is not a must, it does provide with a cleaner, better install. Until further notice, the Galaxy Note 4 Android 5.1 Lollipop update is expected to land at the end of April OTA. Let’s hope that rumor is true.

My life-long dream has been to test out every gadget on the market! Considering the fact that I've rapidly destroyed almost every gadget I've had so far, I'm not inclined to owning something, so my ideal outcome would be to have a different gadget each month. I'm really into smartphones, wearables and tablets and I love Playstation and Xbox, I'm sure I'll beat you at your own game (after a month of training... or two)
Previous Steam Greenlight Spotlight: Red Awakening
Next LG G4 gets Snapdragon 808 CPU, April release date