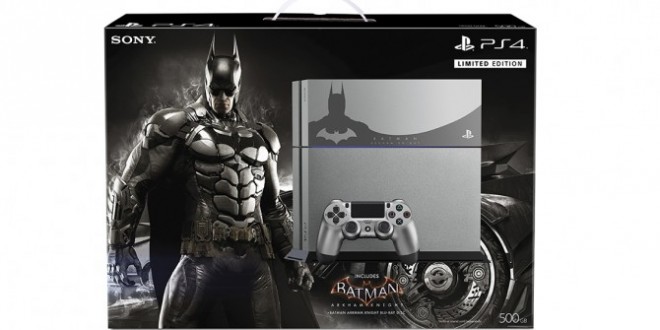 Sony Computer Entertainment and Warner Bros. have given the details of a Limited Edition PlayStation 4 bundle for their upcoming game Batman: Arkham Knight. The package will contain a steel grey PS4 with a Batman silhouette across the top. There will also be a matching grey DualShock 4 and, of course, the game itself. The bundle will cost $449.99. For those who don’t want the special PS4, there will also be a bundle with a regular black PS4 and the game for $399.99 altogether. However, anyone that buys the special PS4 will be able to access a whole host of bonus content before its available anywhere else. This would include additional in-game missions called the “Scarecrow Nightmare Missions” as well as custom skins for Batman and the Batmobile.

Batman: Arkham Knight was recently slapped with a M for Mature rating by the ESRB. This makes it the first title from Rocksteady to receive the rating, as the previous two games of the series were both rated T. Alongside the announcement of the PS4 bundle, Sony and Warner Bros. also revealed a new trailer that features Scarecrow, one of the main villains in the upcoming game. The launch date is set at June 2 of this year. Batman: Arkham Knight is scheduled to be released for Xbox One and Microsoft Windows as well.

The special edition bundles have been popular for a lot of games recently, There is also a Metal Gear Solid V-themed PlayStation 4 scheduled for release with the game. There have also been special editions for games like Destiny, The Last of Us: Remastered, and a 20th Anniversary Edition in celebration of the many years of PlayStation. By packaging the system with popular games, Sony gets to sell extra consoles as well as their newest games.

Check out the new trailer with Scarecrow for Batman: Arkham Knight below.

Emma is an aspiring something-or-other with a love for video games fostered since childhood. She is more prone to rage-quits than she would like to admit. In her spare time, she runs her own blog and writes creatively.
@back_Paq_ing
Previous Facebook in violation of EU privacy laws – unconfirmed
Next Steam Greenlight Spotlight: Flying Tigers: Shadows Over China