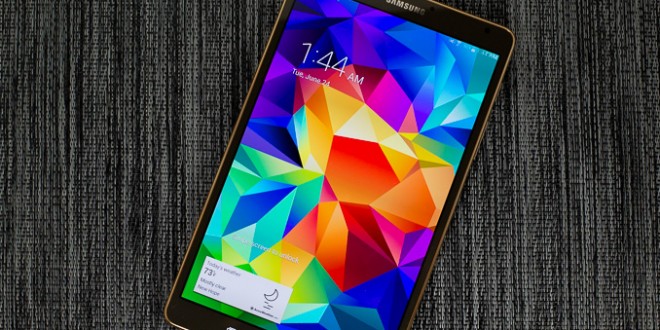 Although Android 5.0.2 Lollipop is not the most recent installment of Google’s new mobile operating system, it is the update that is currently being sent out by Samsung to one of its most popular devices: the Galaxy Tab S 8.4. The Android 5.0.2 Lollipop update went live early this morning to the delight of many tablet enthusiasts out there. Even though the tablet market seems to be dwindling as people move either towards larger phones or convertible laptops instead. Still, Samsung is insisting with its slates, as the company just this week launched a new line-up, called the Galaxy Tab A with Android 5.0 Lollipop out of the box.

The Android 5.0.2 Lollipop update should be arriving to all Galaxy Tab S 8.4 users soon enough, but since it’s a staggered rollout, there could be a few days or even weeks of delay between users across the world. Even if a month has already passed since Android 5.0.2 Lollipop was rolled out to the larger variant of the Galaxy Tab S, we’re glad that at least the 8.4 version of the slate is getting the update. Samsung hasn’t been too thorough with software updates in the past few months, and that delay takes a toll on fans across the world, as seen in forums that are filled with complaints.

This Android 5.0.2 Lollipop update concerns the Wi-Fi only model, which is actually one of the more affordable tablets that you can find on the market right now. If you’re impatient, you can get your hands on the update by checking for updates, but we’re sure XDA will soon post it in the XDA forums as well. The update has only be spotted in South Korea so far, but people in Europe have also reported getting a notification about the OTA today. Those in the U.S. will most likely have to wait a few more weeks to get Android 5.0.2 Lollipop on their devices, and even longer for Android 5.1 Lollipop, which is a bummer. But hey, that’s the way software works. If you’re curious about what kind of features this new update brings to the Galaxy Tab S 8.4, you can check out the SamMobile video below.

My life-long dream has been to test out every gadget on the market! Considering the fact that I've rapidly destroyed almost every gadget I've had so far, I'm not inclined to owning something, so my ideal outcome would be to have a different gadget each month. I'm really into smartphones, wearables and tablets and I love Playstation and Xbox, I'm sure I'll beat you at your own game (after a month of training... or two)
Previous Samsung Gear Circle coming this Spring
Next Producer discusses DLC on upcoming Star Wars: Battlefront